MY LATEST FEATURE WITH PERMISSION FROM NEWSQUEST ESSEX 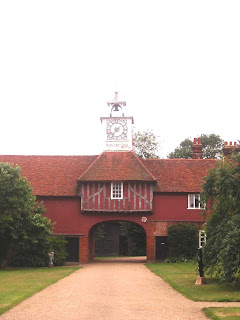 Over the last fortnight, listeners to BBC Radio 4’s Woman’s Hour have had a treat. Lady Audley’s Secret, written by Mary Braddon in 1862 was “book of the week” Cleverly adapted for radio, it was read to millions worldwide. The background of the intriguing story is set at Ingatestone Hall – our very own Tudor treasure – located so close to Brentwood. This is, of course, the ancestral seat of Lord Petre and his family dating back to 1540.

A few years ago, a film was made from Mary Braddon’s book and for those who have visited Ingatestone Hall; the start of the descriptive first chapter seems a little familiar.

‘Audley Court lay low down in a hollow, rich with fine old timber and fertile pastures… At the end of the avenue there was an old arch and a clock-tower, with a stupid, bewildering clock, which had only one hand. Through this arch you walked straight into the gardens of Audley Court.’

Of course we all recognise the setting immediately and interestingly Essex, Brentwood, Chelmsford and Romford are all mentioned, as is the location and proximity of the railway station to the Hall. Although Ingatestone Hall was chosen as a perfect location for the film, neither the young director nor the actors realised that the author of their story had actually lived at the Hall for a few years while writing the book.

During her 55-year writing career, Braddon wrote 80 novels, nine plays and numerous short stories. In 1861, she began writing Lady Audley’s Secret which was serialised in up-market periodicals and reprinted as a three-volume novel. Critics were horrified at the scandalous nature of the book, but her tale of a beautiful murdering bigamist became an instant best-seller. Braddon became known as “The Queen of the Circulating Libraries”. It is believed that even Queen Victoria was a fan of this novelist.

Ingatestone Hall is open to visitors: house@ingatestonehall.co.uk
Posted by Sylvia Kent at 8:42 PM 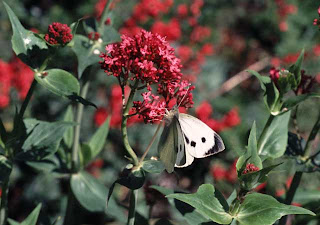 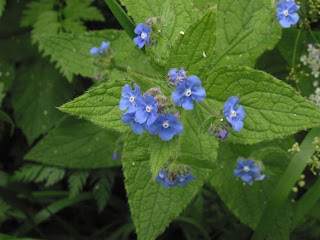 Although still working hard on new book manuscript, I am soon back to writing gardening columns and getting back into the flow once again. Chelsea Flower Show is on the horizon where we will be photographing the best and most expensive of the flower world, but I just wanted to post some pictures for our ex-pat brigade who have mentioned typical English countryside 'weeds'. Here we have Valerian and Alcanet (won't bother you with the Latin terms),which are in full flower at the moment. Shame they all have to be pulled up soon to make space for the plants ready to be popped in.
Posted by Sylvia Kent at 4:45 PM 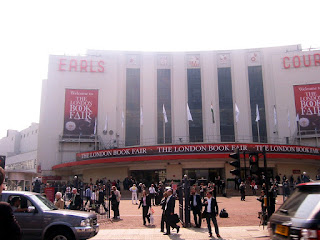 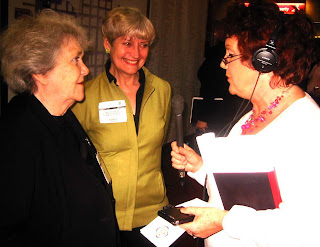 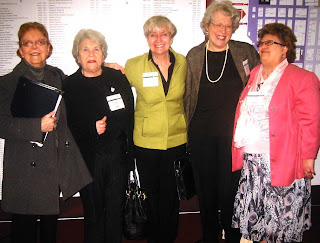 Have been attending the above for many years, on and off, but this year's first day was something special. Interviewed many well known writers and met up with some familiar faces from the publishing and press world. Many more stalls devoted to children's writing. Spent time with the P E N people - useful to me as they are going into my current book.
Posted by Sylvia Kent at 10:16 PM 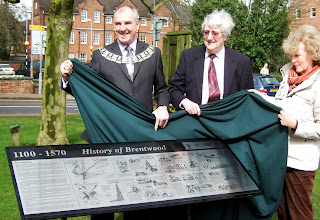 Many authors writing about contemporary events know their books will be out of date immediately upon publication - such is the pace of life - and soon their precious work is old hat, often filed away in the local history shelf of the library. However, historical writer and Curator of the Brentwood Museum, John Fryer, has seen his work preserved in a unique and clever stainless teel medium. Six lecterns showing pages from his book BRENTWOOD - A CONCISE PICTORIAL HISTORY with clever illustrations, are there for all to see. Many residents and visitors have made their way to the town hall at Brentwood to view the lecterns, visit the Museum off Warley Hill (phone 01277 218854 for opening times) and to learn just that little bit more about this ancient town.
Posted by Sylvia Kent at 5:23 PM 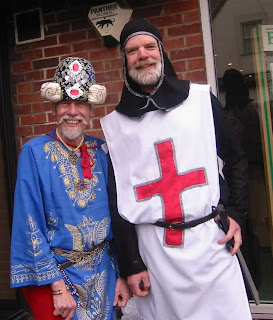 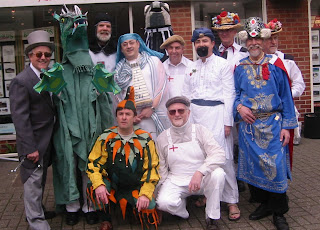 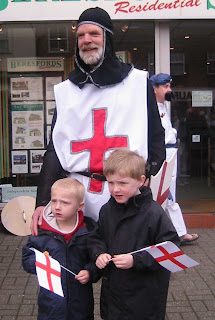 Already the flags are out in London and suburbs and mags and local press are going to town with all the celebrations for 23rd April. I like using some of my own pics to illustrate features. Saturday 25th should be fun with the Mayflower Morris Men providing colour and legend in Billericay High Street. Details and timing 01245 345922. www.mayflowermorris.com.
Posted by Sylvia Kent at 11:19 PM 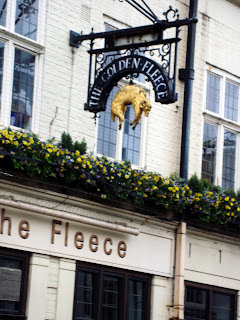 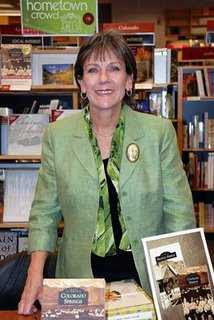 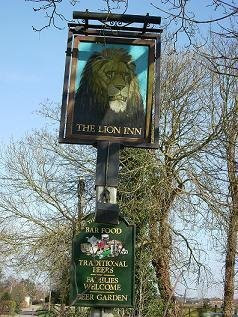 My little sister Elizabeth is a well published author and journalist. Living in Denver, Colorado, her work is in great demand all over the world (lucky girl) and she always finds interesting nuggets of history for her website which enjoys a host of returning regular viewers. I like this particular piece about our English pub signs. Every 'hostelry' she has mentioned can be seen around our English (and particularly, our Essex countryside. Here is a tiny glimpse of her super website. www.extraordinaryplaces.net
*********************************************************************************
Pub signs have been used in England since the 14th century when in 1393 King Richard II ordered landlords to put signs outside their premises so they were easy to identify. Some pubs have maintained the same name for centuries. The signs were highly graphical to make it easy for travelers who would neither read nor write to recognize the name of the establishment. Pubs (or inns if they offered rooms to rent) were often used as landmarks together with churches, milestones and cairns to help a traveler find their destination. Often the signs indicated an allegiance to the crown with names such as “The King’s Head” or “Queen’s Head”, but others signified the area specialty such as “The Lamb and Fleece” (farming) or “The Cutlers Arms” (an area known for their cutlery expertise). Visit: WWW.EXTRAORDINARYPLACES.COM
Posted by Sylvia Kent at 3:26 PM 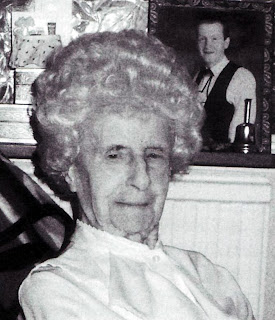 I had intended to post news of the revamp of my first book published in 2001 entitled BRENTWOOD VOICES, which, as you see, has a new name and a new cover. Some of my six other books have received the same treatment - I am pleased to say. However, this one is rather special. I have just received the sad news that George Liddiard who, with his late wife Muriel, were so helpful in supplying information for my book, has died. His mother-in-law, Florence - who was almost 106 when she died - is on the front page (in that lovely white hat!) and there are plenty of images of Florence and old Brentwood within its pages. So you see a sixteen-year-old Florence on the front cover and then when she was coming up to her 106th birthday - what a privilege to meet, photograph and record such a wonderful lady!
Posted by Sylvia Kent at 7:40 PM 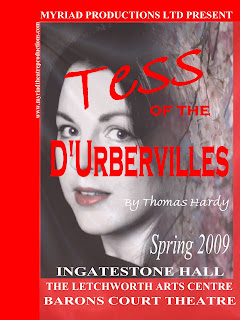 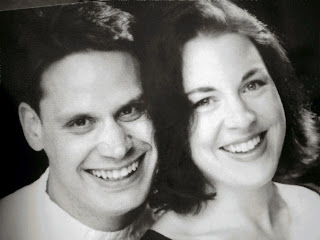 My good friends James and Joanna - great actors - are presenting TESS OF THE D'URBERVILLES on Saturday, 23rd May at Letchworth Arts Centre. Letchworth Garden City in Hertfordshire (Box Office 01462 670788)and from Tuesday 26th - Sunday 31st May they will be appearing in London at BARONS COURT THEATRE. Box Office 020 8932 4747. This is a new adaptation for the stage by Joanna O'Connor. Curtain up at 7.30pm - should be a wonderful evening.
Posted by Sylvia Kent at 8:07 PM

For any writer, it is great when their older books are re-published and this has happened this week with the revamping of my 2001 published book BRENTWOOD VOICES. I interviewed more than 100 people who had some wonderful anecdotes and memories of this busy Essex town. Now it has been revamped with new book cover back and front, new name VOICES OF BRENTWOOD and, delightfully, a new readership. My book £12.99 can be purchased via Amazon and also, of course, from most bookshops who can order it, if not on the shelves.
Posted by Sylvia Kent at 1:28 PM