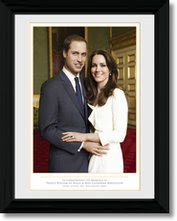 Thursday 28 April and the day before the royal wedding. Royal fever pitch here in Essex with flags and bunting at the ready and street party plans all ready to go. It's a shame that after a tremendous mini heat wave amidst a traditionally April-shower month, it looks as if the bridal pair may have to fight off the rain tomorrow.

Several locals and friends are catching their train (30 minute ride) to Green Park to find a place along The Mall to camp out overnight. We wish them luck and suggested taking their red, white and blue fleeces. Few pics to illustrate this special time in England.
Posted by Sylvia Kent at 9:27 AM 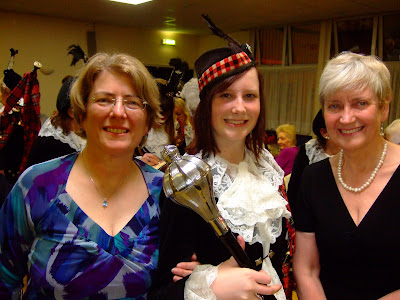 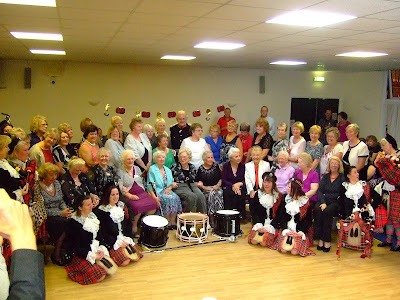 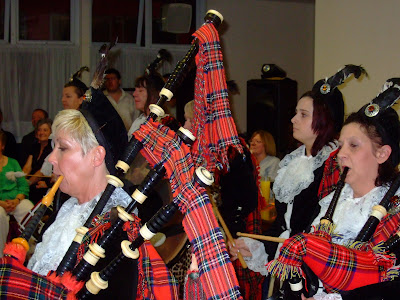 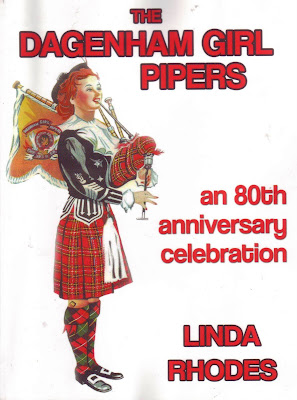 Linda Rhodes is pictured here with Pipe Major Chelsea Fox and yours truly.

We are all familiar these days with musical boy groups and to a certain extent, girl bands are nothing new, but more than 80 years ago they were a rarity.

When the Dagenham Girl Pipers were founded in 1930 by the Reverend Joseph W Graves, they caused a sensation when they made their debut in this once-small Thames-side town. Joseph Graves was no ordinary minister. When he and his family arrived in Dagenham, he was in his fiftieth year. Here was a man with a strong personality. Alongside his Congregational church activities, Joseph organised the Sunday School. To motivate the youngsters, he introduced the bagpipes, the swirl and sound of which he'd loved from his own youth.

The excitement with which this idea was received by the Sunday School girls, prompted him to approach Pipe-Major Douglas Taylor with the King's Own Scottish Borderers who ran a Highland dance and piping academy in Hertfordshire. At first, Pipe-Major Taylor was doubtful. "There's no reason - no physical reason at least, why girls shouldn't play the pipes. It's just that the bagpipe is a man's instrument and if I started to teach girls how to play, I should be not only criticised in my own country, but probably ostracised as well. Now, if you were thinking of forming a boys' band.." You could see his point.

Pipe-Major Taylor eventually agreed to teach piping to a dozen girls. The first practice meeting for the youngsters was Saturday 4 October 1930. This day was an important one for 11-year-old Peggy Iris, a slim dark-haired girl whose own destiny was shaped by that first introduction to the bagpipes. Her role within the DGP was to be a life-long profession.

Linda’s book tells the full story, including the band’s crucial role during the Second World War; also the heart-warming Millennium Day reunion. Linda has written a wonderful book, one that will bring pleasure to readers including the many former Dagenham Girl Pipers and their families around the world. It is also a valuable historical book about Dagenham's past. 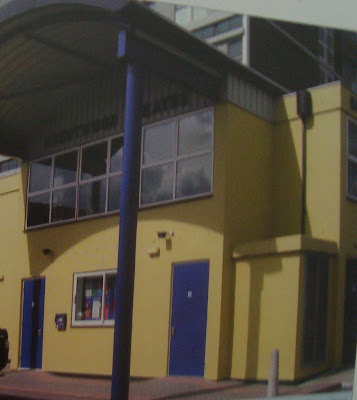 The shows that are currently being publicised at the Brentwood Theatre are selling out week after week. At the end of March, The Hutton Players sold out all three performances of Hay Fever, and this week has seen two of the three nights of ‘Allo ‘Allo with full houses (and just a small number of returns on the opening night, effectively giving a full house too!)

Theatre Administrator Mark Reed commented, “We do not choose the shows, it is up to the groups themselves to select and produce whatever production their performing members and anticipated audience would like to see on stage. Therefore, the accolade for selling out these shows must go to The Hutton Players and The New Venture Players, and to their members for selling so well to their family and friends.”

The summer season has just been launched, which opens with The College Players’ production of Blithe Spirit, another show that is expected to sell well.

Twenty two different productions will be making up fifty five performances with musicals including The Mikado and Guys and Dolls, drama including Vinegar Tom and a new amateur national premiere of Really Old, Like Forty Five, and young people performing in a variety of shows from Terry Pratchett’s Mort to two versions of Bugsy Malone.

A brand new production for this summer has already sold all 135 seats – Everybody Dance Now is a showcase by performers from Funky Vibes Dance School including street, cheerleading and lyrical dance. Principal of the School, Hayley Davies, has performed on TV and at The London Palladium and even toured England, Ireland and Mallorca before returning to the UK.

Hayley commented, “I used to perform at Brentwood Theatre when training at Havering College, and I set up my own dance school a couple of years ago.

“This is my first showcase and I was delighted when the Theatre called me to say we had sold out, and offering a second performance. The kids and the parents are really excited – and we still have nearly three months to go.”

Many people have queried how the recent arts grants have affected Brentwood Theatre. Mark commented, “Essex County Council charge us no rent, and the Borough pay our rates, but other than that we make ends meet by earning income from hiring out the venue, using volunteers to manage the Theatre, and by constant fundraising which many individuals are generous to support.”

The Theatre’s Box Office is open from 10am to 4pm Monday to Friday, and tickets range usually around £10 - £15, depending upon the production.

Full details of all productions are posted on www.brentwood-theatre.org which is regularly updated.
Posted by Sylvia Kent at 12:33 PM 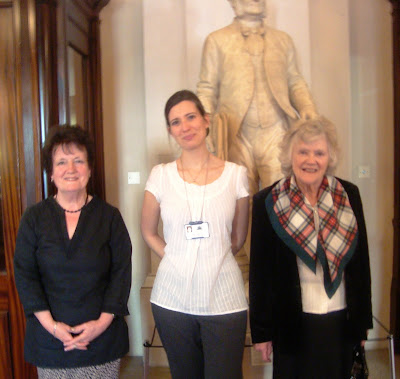 Our SWWJ visit to the Royal Opera House in London's Covent Garden was superb. This theatre is the world centre of music and dance. Enjoyed going backstage, watching the young ballerinas rehearse (Cinderella on at the moment) and learning the history of this magical place. I'll be writing a feature for my supporting www.suite101.com On-Line Magazine, so for more detail, follow the blog. Pictures arriving tomorrow.
Posted by Sylvia Kent at 10:42 AM