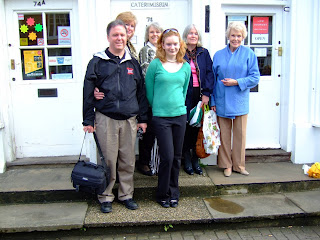 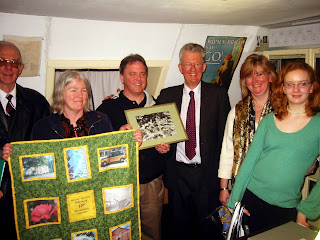 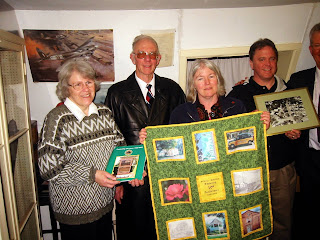 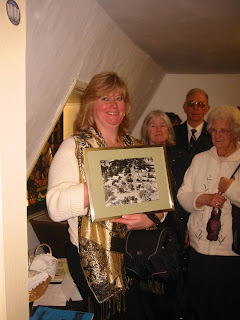 This year is rather special for the Association that runs Billericay Twinning Society. It is ten years since the group was formed and the friendship continues across the Atlantic. To mark the occasion, some of our American friends made their way to our town and visited the Cater Museum in Billericay High Street. Gifts were exchanged and some of our visitors from Massachusetts seemed pleased to be photographed presenting their beautiful quilts to Chris Brewster, Curator of our Museum. Let’s hope they come again.
Posted by Sylvia Kent at 9:03 PM

Last chance to publicise our great Fund Raiser for tomorrow evening Come and join us raise money for the ATC Cadets in Billericay. Lovely food produced by Sam who gives us recipes and advice as well as a chance to buy top quality kitchen tools.
Posted by Sylvia Kent at 2:14 PM 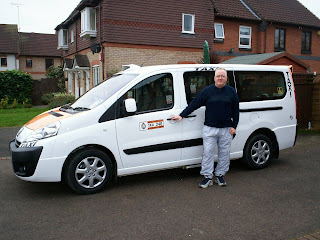 Meet Mark Waller who runs Advanced Taxis Billericay, a firm launched in November 2007. Mark and his family have lived in Billericay for over 25 years so he has excellent background knowledge of the town and its taxi requirements. He has seen the town transformed from being a sleepy semi-rural High Street during the 1980s to the busy town it is today. He knows there is no replacement for the local personal service that many residents of Billericay desire, confident that their taxi is going to turn up on time, be clean and presentable with a friendly driver. Mark’s newest development concerns TAXICALL, a group of three independent taxi drivers who for a minimal fee can receive bookings direct to their own mobile phone via a dedicated number 01277 888 988. Advanced Taxis' current vehicles are all seven seaters. There are plans to eventually add saloon and 8 seater cabs. When a customer rings the number, they will be directed to the next available driver who will give them a time for pick up. This is a simple but most effective operation, cutting out the need for premises and taxi controllers, thereby reducing costs. Advanced Taxis are also available for Airport Runs,Social functions and Corporate Events. This scheme is launched on Thursday lst May. Further details from Mark advancedtaxicall@btinternet.com or phone: 07979 456785
Posted by Sylvia Kent at 6:30 PM 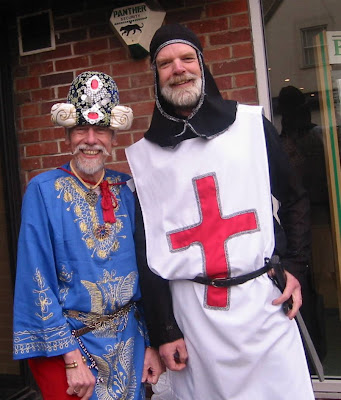 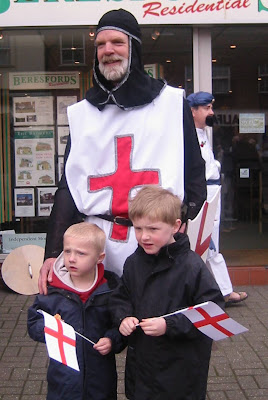 Although England's special day falls on 23rd April, our local Mayflower Morris Men will be celebrating St George's Day on Saturday, 19 April with an evening of English song, dance, poetry, prose, music and drama. Come to St Mary Magdalen Church in Billericay High Street for a great evening 8-10.30pm and phone Geoff Douglas on 01268 710709 or email bagman@mayflowermorris.com for tickets £5.00
Posted by Sylvia Kent at 2:43 PM

When author Liz Wallace who lives in Denver, came to England recently for book-signing events in Essex she was pleased to meet members of the famous Thameside Mummers who will surely be celebrating St George's Day - 23rd April. Liz's book CHRISTMAS PAST IN ESSEX was a complete sell-out well before the festive season. Second edition will be on sale in all Waterstones in autumn.
Posted by Sylvia Kent at 9:48 PM 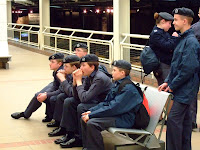 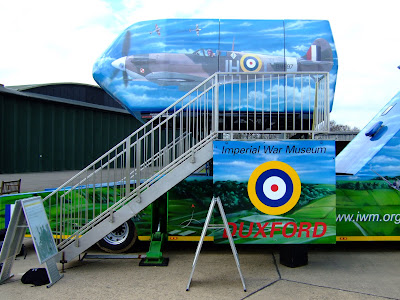 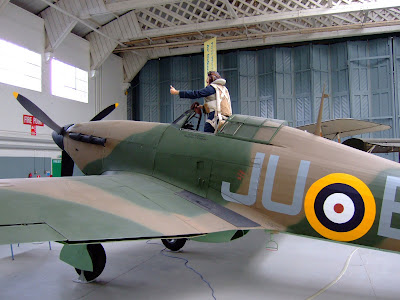 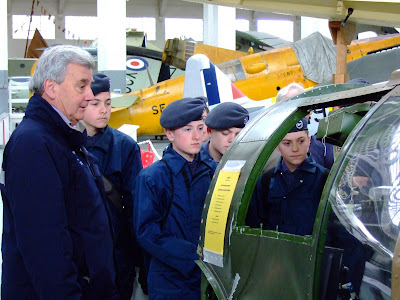 More photos of a great day out.
Posted by Sylvia Kent at 5:02 PM 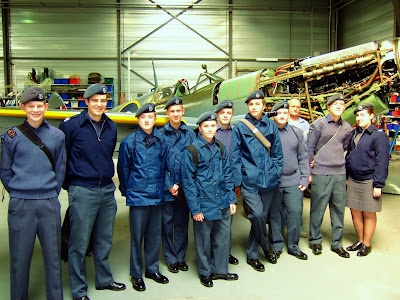 Visit to Duxford in Cambridgeshire for the 2393 Squadron Air Training Corps cadets from Billericay on Monday. This is part of the Imperial War Museum and the cadets enjoyed a wonderful conducted tour by staff member, Peter Loweth. Too much to see in one visit, so a return will be on the cadets’ agenda later in the year.
Posted by Sylvia Kent at 4:58 PM 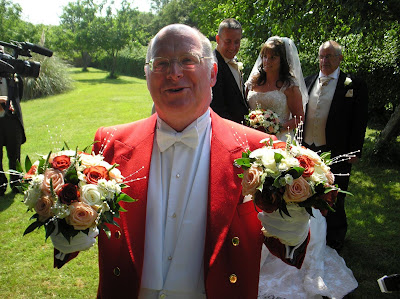 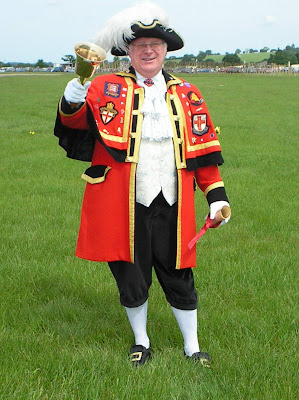 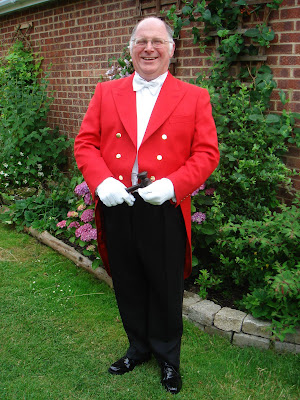 Here is a busy man with two fascinating jobs. Jim Shrubb is both Billericay Town Crier and Toastmaster Extraordinaire. Jim is experienced and reliable and adds a wonderful presence to all those special occasions from a business event to a family wedding. He is happy to preside over events throughout the South East. Contact him 01277 655831
Posted by Sylvia Kent at 8:51 AM 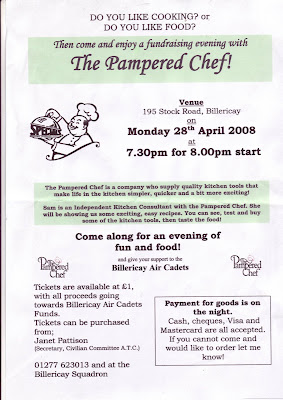 Come and join us raise money for the ATC Cadets in Billericay. Lovely food produced by Sam who gives us recipes and advice as well as a chance to buy top quality kitchen tools.
Posted by Sylvia Kent at 7:53 PM 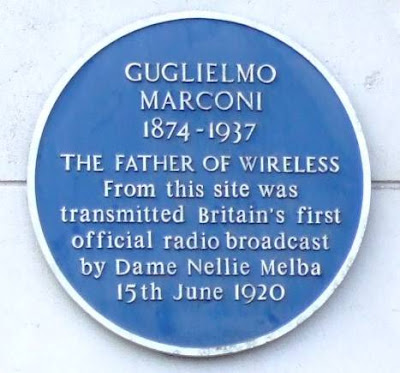 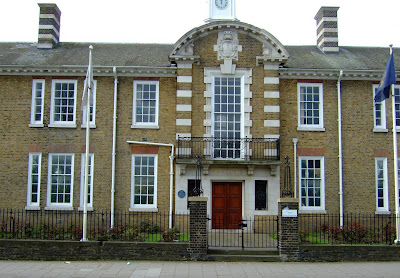 As we enter Chelmsford, the county town of Essex, we see the familiar sign “The Birthplace of Radio”. Residents of the town have long regarded this as a matter of fact, yet visitors from all over the world marvel at what Guglielmo Marchese Marconi achieved when he first arrived in Chelmsford in 1896 from Bologna. As a 22-year-old scientist on the verge of perfecting his dream that eventually changed the world for many people, he was already well ahead of patenting his idea in his home country.

In 1900, Marconi’s Wire-less Telegraph Company issued the legendary 7777 patent allowing adjacent wireless stations to operate without interfering with each other, followed in 1901 by the first transatlantic signal between Cornwall and Cape Cod.

Marconi founded the Wireless Telegraph Company, building his first factory in New Street. There was much urgency for the building’s construction and this became the world’s first purpose-built radio factory, taking just 17 weeks for the 500 workers to erect it in 1912. Here, he and his associates carried out much of the early research into wireless telegraphy.

We’re familiar with the famous photograph of Dame Nellie Melba the Australian opera singer who made the first official radio broadcast in June 1920 from the New Street factory. Other transmitting research buildings were constructed, including the famous ex-army hut at Writtle, from which that famous wireless engineer, Captain Peter Eckersley began transmitting programmes on Tuesday evenings for half an hour. Eckersley was presenter, producer, actor-manager and writer His announcement; "This is Two Emma Toc, Writtle testing, Writtle testing", became almost a catchphrase of the day. Soon the sister company 2LO was created, then the BBC. 2MT did not itself become part of the BBC and closed down on in 1923. Peter Eckersley went on to become the founding Chief Engineer at the British Broadcasting Company.

The Essex writer, Arthur Mee, commented: “Now that the world is one vast whispering gallery, it is difficult to remember that it began at Writtle – the birthplace of British Broadcasting.”
Posted by Sylvia Kent at 6:03 PM