Following months of hard work writing features and researching my latest non-fiction book (my tenth)  about the history of Barking & Dagenham, I can now relax just a little. Tonight I started reading Sandra Howard's newest book TELL THE GIRL and am loving it.  Will let you know how I get on.  As well as being one of London's best known and beautiful models, Sandra is also one of our Patrons at the Society of Women Writers & Journalists.

Posted by Sylvia Kent at 8:52 PM No comments:

Posted by Sylvia Kent at 5:03 PM No comments: 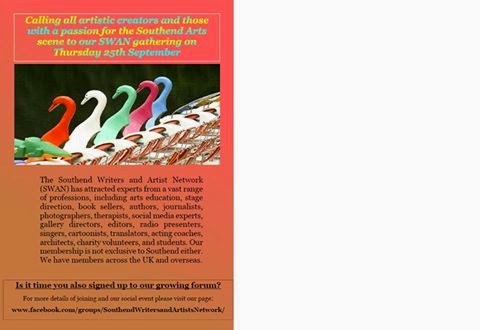 SWAN – Who are we?  My pal Audrey Snee gives us some background


The Southend Writers and Artists Network was created on 16 September 2011 as a way to communicate with other authors and allow each other an opportunity to promote our work as well as inform members about events, competitions, festivals and blogs of fellow writers and artists. The name needed to be easy to remember and so the name Southend went in to make SWAN, but it is not purely a membership for Southend-based creative types, and our membership covers the East of England and beyond with several overseas writers who have a connection to the region.


The network has no rules as such, rather an understanding among members it primary role is to promote the work of writers, poets, illustrators, artists, photographers, etc. SWAN is especially keen to invite freelancers, budding authors, amateurs and basically anyone who has a passion for books. It is surprising then that the membership has gone beyond its original purpose attracting professionals from theatre, education, architecture, cartoonists, book sellers, journalists, therapists, gallery directors, social media experts, radio presenters, translators, singers, students and charity workers.


It has expanded at a steady rate but in recent months has doubled in number to 215 thanks to a poster campaign that was shared on members’ personal pages also. In the past three years our members have put out over 500 updates, many of which are seen by over 150 people, mostly organic reach. We have found images are best to drawing attention and artists have the advantage there but many authors have eye-catching book covers also! It is hard to keep up to date with every competition and event, so it is a great way to find out what is going on. Authors are encouraged to request an mp3 clip of their radio interview which can be posted on the network page, likewise video footage of interviews is also welcome. Twitter (@estuarybooks) has also played a role in attracting new members. SWAN also got behind a local campaign to save Leigh library reposting blogs and update from campaigners. Newspaper and magazine reviews of books and work also feature on the network page. A new trend is for authors to create video advertisements, with one author turning his blurb into a re-enactment of a scene from the book with semi-professional actors! New members are joining every day and it is hoped our first networking event in September (details on the network page as only members can attend) will hopefully spur us on further.
For more details please visit: https://www.facebook.com/groups/SouthendWritersandArtistsNetwork
https://www.facebook.com/groups/SouthendWritersandArtistsNetwork/

Michael Foley has written at least twenty books on aspects of war and peace in my own county of Essex, and also Kent and London.  Now he has researched another interesting topic, that of of Britain's Railway Disasters, sad though they are. Michael traces the history of the railway and how the idea of running trucks on rails comes from a very much earlier period.  Rails were used to carry trucks in mines in Europe as far back as the sixteenth century. Then, of course, the trucks were pulled by horses or the miners themselves. There are so many current enthusiasts thinking in a rather sentimental reverie about the ancient steam trains but I'm sure the aspect of danger has not really been addressed.  Michael Foley has spent years studying the social context of how railways were observed, particularly during the Victorian period and his book really opens the readers' eyes. Beautifully illustrated with numerous unseen photographs and drawings, it is fascinating and published by www.pen-and-sword.co.uk at £19.99 (US $39.95)  ISBN 178159379-5

Posted by Sylvia Kent at 1:30 PM No comments:

JUST A FEW OF THE TITLES PUBLISHED BY OUR SWWJ MEMBERS - AN INTERESTING BUNCH AND ALL SO DIFFERENT! 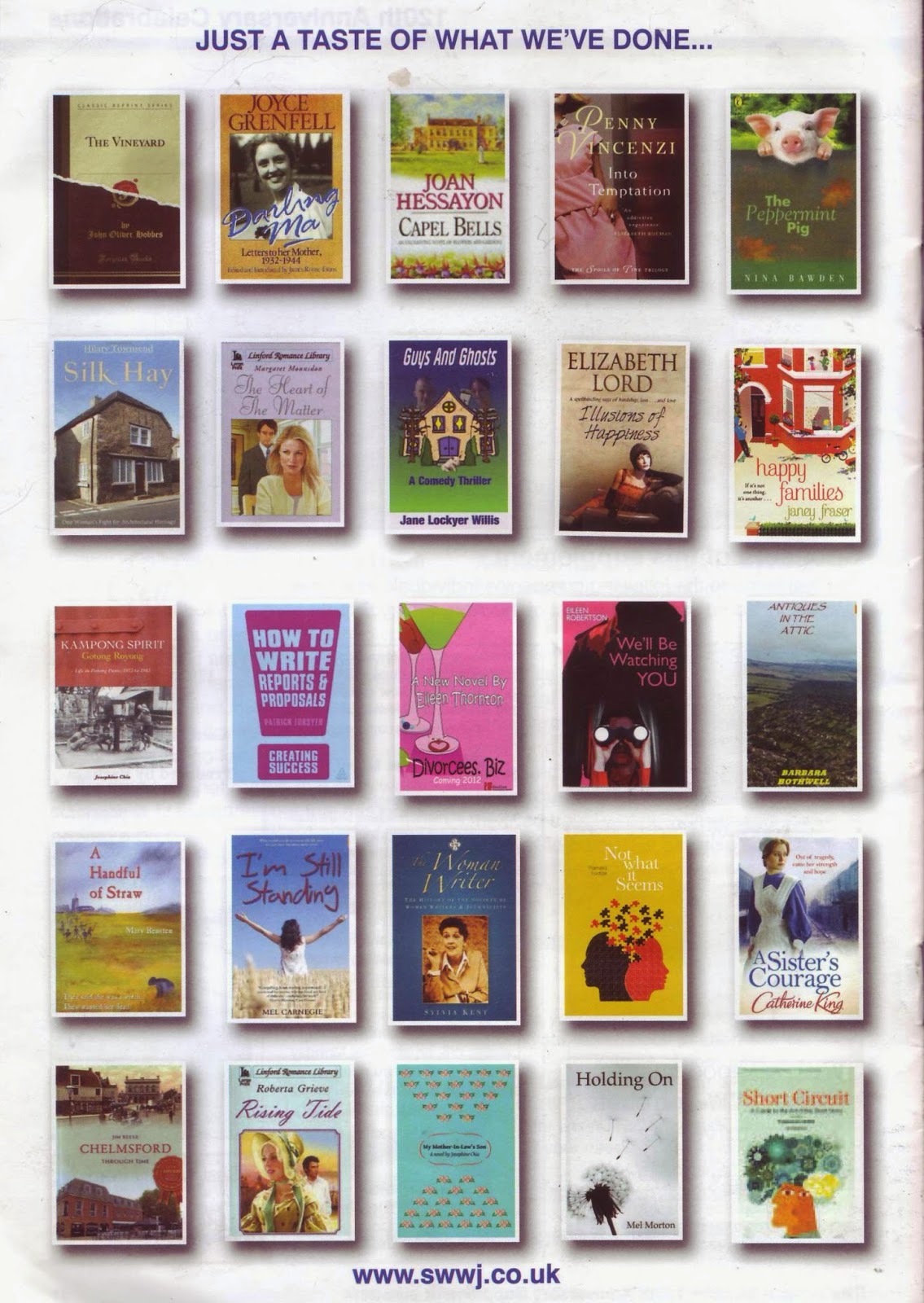 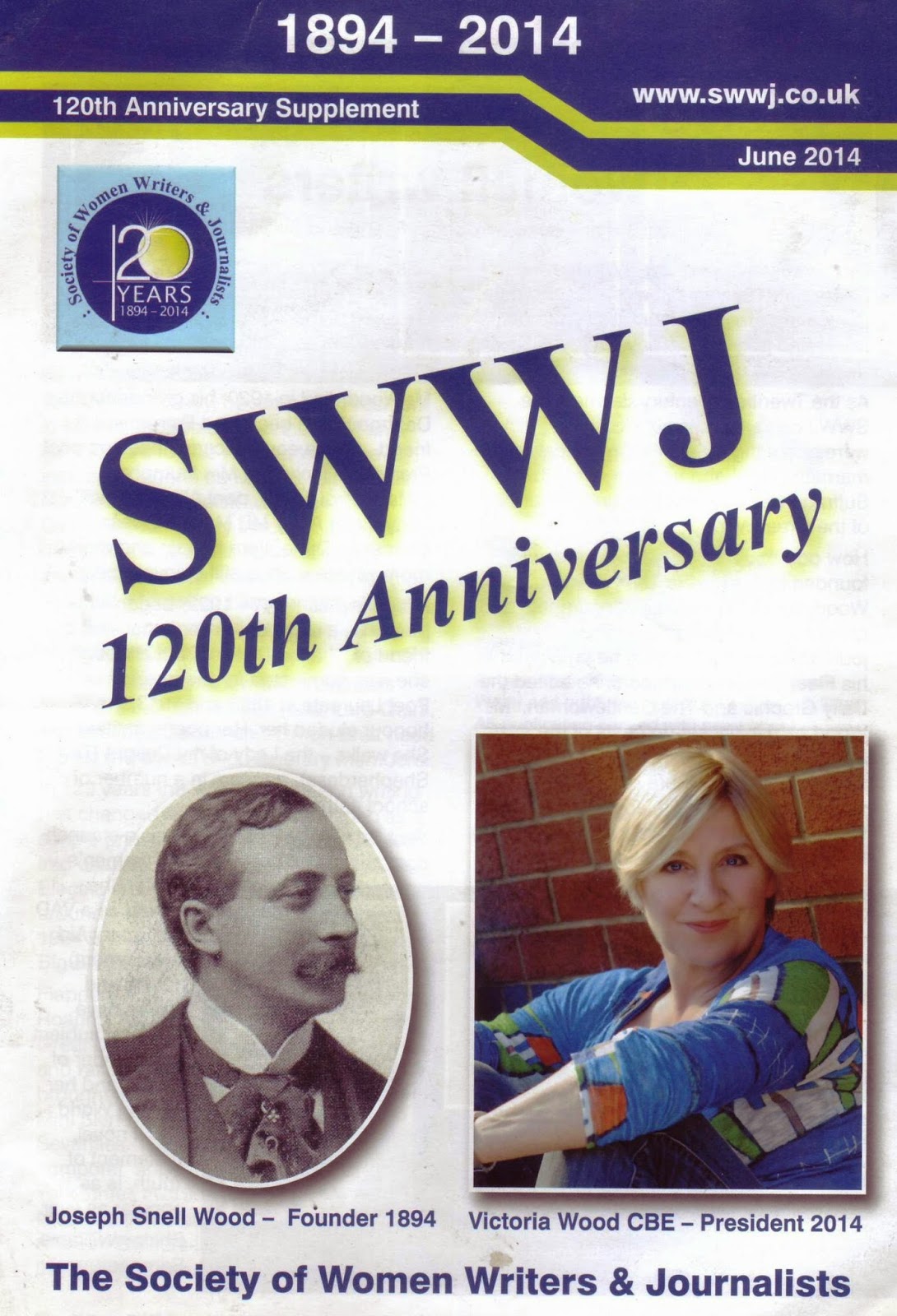 
Writers from around the world are planning to come to London on Tuesday 14 October, 2014  to celebrate our rather special anniversary. Can it really be 120 years since this extraordinary writers' group, started by a newspaper magnate, Joseph Snell Wood, launched the Society of Women Writers and Journalists?  Fleet Street editors were intrigued by the idea of female journalists, novelists, playwrights and poets, appreciating their value at long last. Things were looking up!
Up until then, women were forced to use male pseudonyms to see their work published. Some of our  earliest members reported from the Transvaal in the Boer War,   the Great Indian Durbar, First and Second World Wars, and past members have reported from war zones thereafter. Phyllis Deakin was the first woman journalist to join The Times' staff and subsequently, first woman reporter in Paris after it was re-taken in 1945.  Log in tomorrow for the next episode!  For ticket applications for the luncheon contact www.swwj.co.uk
﻿
Posted by Sylvia Kent at 2:49 PM No comments: