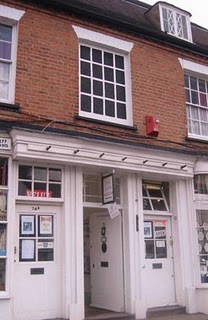 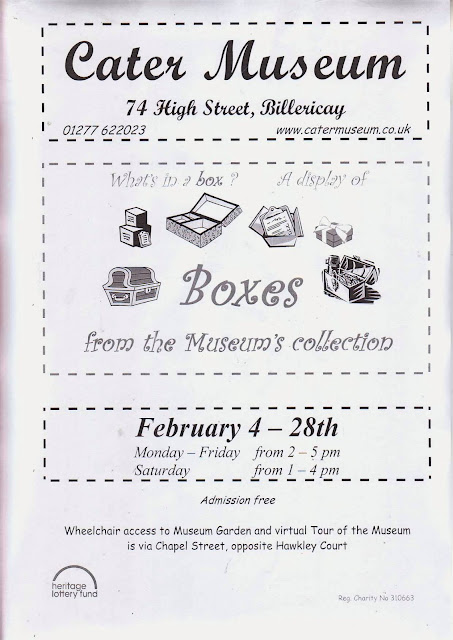 There's always something of interest going on at our Cater Museum.  Maybe I'm biased but know that visitors will enjoy whatever our Curator, Chris Brewster, has in store.  This upcoming display will be of great interest to many and she is getting ready to show off some more of our wonderful artefacts beginning 4th February till the end of the month. These particular decorated boxes from the Museum's collection are fascinating, so do pop in and take a look.  The Museum is open Monday to Friday from 2-5 pm and on Saturday from 1 - 4pm.
Posted by Sylvia Kent at 2:52 PM No comments: 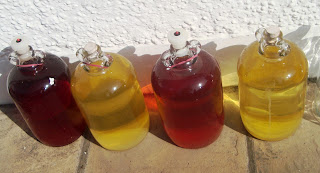 Making a few new wines.  Recipes on www.suite101.com.  For other keen wine making enthusiasts, I am using some of my homebrew  within new recipes for a kindle book that is being currently researched.
Posted by Sylvia Kent at 3:02 PM No comments:

A grand book signing will be taking place at Waterstones Bookshop in Brentwood High Street on Saturday 12 January at 11.00.  Maggie Freeman will be signing her latest book CYMBERIE, a super thriller set against an Essex background in Tudor times.  Look forward to seeing many of our writer friends at the event, followed by our January writing circle meeting at 2.30pm.
Posted by Sylvia Kent at 10:55 PM No comments:

It was interesting to meet up with Erika Goulden in London recently who presented me with a copy of her latest book SUSATO.  Published by Scriptora at £10.99, Erika uses the pseudonym Alfa.  She is a long standing member of the Society of Women Writers and Journalists and has won several top awards for her poetry.

This book, however,  is very different from her previous work. Alfa writes about Susato, a medieval Westphalia town during the  Nazi era of World War Two.  We learn about Irmi who lives alone on her island retreat with her recollections.  On her island, Irmi writes about  life with her family who lived in Susato, a place of architectual beauty and wonderful history.  The reader soon realises - from the intriguing family photographs - that this story is true and we are treated to clever thumbnails of  some of her Jewish extended family.  Alfa describes her aunts and uncles, cousins and friends each one with their individual fascinating characteristics.

This current book is the latest title from Scriptora, an imprint from the Society of Women Writers and Journalists' publishing arm. An intriguing book that treats us to an aspect of the German way of life during that horrible war.
Posted by Sylvia Kent at 3:34 PM No comments:

For years I've listened to Stephen Bayley on BBC Radio 4 and have read his eclectic features in national press, but until now, haven't bothered with his numerous books.  However, have just finished his DICTIONARY OF IDIOCY and love the silliness of it.

As the author kicks off: "This is a book about opinions.  It is a misguided tour with no real beginning or end, but one which passes some interesting places on the way."

And it sure does.  Bayley is often asked for his opinion and his responses are published in The Times, Telegraph, Guardian, Observer et al and the content of his book is displayed alphabetically from 'Abstraction' to 'Yvetot'.   We're treated to thumbnails on a variety of characters from the past including  Ralph Waldo Emerson, Samuel Johnson, John Ruskin , even poor old Gertrude Stein gets her two minutes and there's much more. Funny stuff.

In this A-Z of modern ignorance, Bayley has gathered curious, ridiculous and downright shocking facts that I certainly didn't know.  Published by Gibson Square (www.gibsonsquare.com) at £7.99 this is one book that Andrew Marr said he couldn't put down and I certainly keep dipping into it.  A good read!
Posted by Sylvia Kent at 9:33 PM No comments: