With thanks to Chelmsford Weekly News 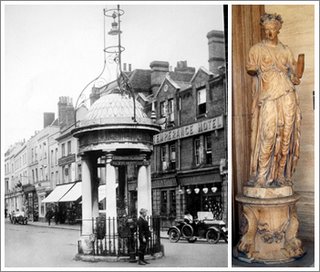 If buildings could talk, what fascinating tales would emanate from Chelmsford’s Shire Hall. More imaginatively, what could the lovely Naiad – or water nymph - whose presence currently graces the foyer, tell us about her 215 years’ existence in the town.


John Johnson, County Surveyor of Essex was the man who designed and laid the foundation stone for the Shire Hall in 1789. Construction took two years and Johnson found time to create the Naiad from Coade Stone to stand in front of the Hall. When she was unveiled in 1791, she resembled a veritable Amazon - six feet tall – leaning on a shield on a cylinder decorated with four dolphins. The pillar on which she stood was five-foot high. Water poured from the mouths of the quartet of lions at the statue base. Burgess’s well (now under Fairfield carpark) which fed the lions had been sunk by the Friars during the Middle Ages and released water in an open channel down the High Street. The weekly market which was had been held in Tindal Square for centuries, benefited from the constant waterflow.

In 1814, Naiad was moved from Tindal Square to Springfield. The Conduit, a domed stone rotunda, took her place. In 1852, the Conduit was moved to the corner of High Street and Springfield Road. It stayed there for almost 90 years, then being a traffic hazard, was moved unceremoniously in 1940 to Tower Gardens where it remains.

But where was the Chelmsford Naiad? It’s a long story, but suffice to say that in the 1960s she was located and donated to the Borough Council who placed her on display in the Chelmsford and Essex museum at Oaklands Park. Finally, in 1980, she returned to the Shire Hall. Here she stands today – minus her shield, part of her arms and a portion of her nose, but nevertheless - still beautiful.

The Shire Hall has flourished for over two centuries. It was built on the site of the old Sessions House which had been the seat of the Assizes and Justices (Le Tolhouse) since the 13th century. During its construction, the ancient courthouses were retained to allow the sessions to continue. Shire Hall, with its three storeys, five bays with three arched entrances were faced in Portland stone. Coade stone was used to create the panels showing Justice, Wisdom and Mercy, and are still there above the three windows. The Courtrooms, huge ballroom and furnishings were paid for by public subscription with a £20 contribution from the Lady of the Manor, Ann Mildmay.

The Shire Hall has been pivotal in all aspects of our County Town and it is fitting that our Naiad statue has returned safely home.

Posted by Sylvia Kent at 4:52 AM No comments: 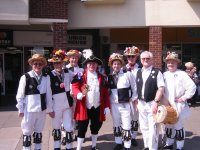 The Essex town of Billericay is proud of its Morris side which was founded in 1973. The side wear distinctive black and white tabards with the Mayflower ship on their backs, symbolising the five local people who became known eventually as the Pilgrim Fathers who sailed to Massachusetts in 1620. We also have our own Town Crier, Jim Shrubb seen here with the MM who is always in fine voice. More pictures and further historical background can be found on the Essex County Council's web link here.
Posted by Sylvia Kent at 1:09 PM No comments: