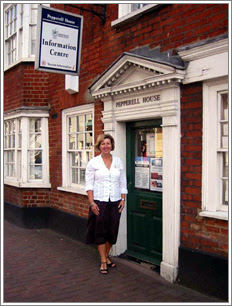 By permission of Newsquest Essex

Pepperell House – Brentwood’s Information Centre in its prime location at 44 High Street – enjoys a central position, its helpful staff providing a warm welcome to tourists and residents alike. Here you will find advice, maps and up-to-the-minute information, all aimed at helping to make visitors’ time in the town more enjoyable.

Many tourists are intrigued with this fine old building standing so close to the Chapel ruins. However, Brentwood residents appreciate how fortunate they are that this particular eighteenth century building hasn’t been demolished as has most of its neighbours. Until about fifty years ago, there were many similar large red brick buildings facing the unusually wide, formerly tree-lined, High Street. Built for the wealthier folk, many were private homes for the professional classes. Labour was cheap then and servants were usually crammed into the tiny attics. Pepperell House has retained these rooms as offices and to reach them you have to climb winding flights of stairs to approach them via creaky landings. One wonders if some of Brentwood Council staff and Chamber of Commerce folk who work within, have encountered the resident ghost!

Local Studies in Brentwood Library offer good research references to many of Brentwood’s fine old houses – some demolished – others which were refurbished and converted into shops, above which owners and managers often lived with their families.

Local historian John Fryer has written about the commercial side of Brentwood and has collected reminiscences and photographs of the people who once occupied the buildings.

Strangely though, there is little information about No 44. We have to look at the published recollections of one of the town’s earliest chroniclers, John Larkin (1850-1926) who used much of his wealth for the benefit of the citizens. He wrote in his "Fireside Talks" set in the 1860s, that he remembered Mr Quy at the address practising barber and haircutting services. As with many shopkeepers he obviously diversified and began selling toys and stoneware. Larkin wrote that he felt that the house had in earlier times been connected with the ancient St Thomas’s Chapel.

By the turn of the twentieth century, the building was the address of an auctioneer & estate agency, and this trend continued for many years through the partnership of Jinman and Richardson. Later, Thain & Richardson, that well-known partnership, followed by Douglas Allen Spiro. Other businesses have used the warren of offices until October 2002 when the property owner, Elsie Pepperell, died. She had spent much of her life in the town and bequeathed the premises for the use of the people of Brentwood. So this fine old building lives on with its new name, offering help to the community. For information: Telephone 01277 200300

Posted by Sylvia Kent at 8:49 PM No comments: