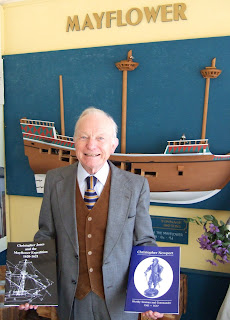 Dr. David A. Male
14 MAY 1607 - 2007
400TH ANNIVERSARY OF JAMESTOWN VIRGINIA
In Billericay, Essex, England the story of the Mayflower ship taking the Pilgrim Fathers (with six people from Great Burstead on board) to the New World in 1620 is familiar. Details of the epic voyage to Jamestown, Virginia which took place thirteen years earlier is currently the subject of great media interest, particularly as HRH Queen Elizabeth is currently in America.
Four hundred years ago, three ships left London’s ancient Blackwall pier. The 105 passengers from many parts of England, were destined for Virginia in the New World. Some historians have given Gold, Glory and God as the impetus for the journey. The colonists were sponsored by the London-based Virginia Company, who hoped to reap profits from the American coast. Another reason was to bring Christianity to the Indian people, but the most compelling was the alluring possibility of finding the legendary Northwest passage to the Orient.
The overall commander of the expedition to America was Harwich-born Captain Christopher Newport. The trio of ships – the Godspeed, Discovery and Newport’s flagship, the Susan Constant, reached Chesapeake Bay on 23rd April 1607 and the spot they eventually chose to make landfall – on 14th May was named in honour of James l.
The account of the new arrivals’ early attempts to forge a life in this brave New World has been told many times and doesn’t make easy reading. The small community suffered terrible hardships during those first years in America. There was conflict with local Indians; difficulties with climate, soil, disease and death came to a large proportion of them during the dreadful ‘Starving Time’ of 1608/9 which decimated the number of pioneers. But they overcame all of these hardships over ensuing centuries. Jamestown is now referred to as ‘the cradle of America,’ and Newport’s name is indelibly associated with its foundation.
On lst May 2007, members of the Harwich Society invited Mr Michael Macy - the American Cultural Attaché at London’s American Embassy - to unveil a plaque marking the life of Christopher Newport who’d played such a vital part in the first permanent settlement of Jamestown. Last week, our own Queen Elizabeth left England on a state visit to Virginia, where with President Bush, she is taking part in similar ceremonies, marking the 400 years of the landing.
As Harwich Society members, Mr Macy, the Mayor of Harwich, Council officials, historians and photographers gathered on Ha’penny Quay Centre, the newly published book "Christopher Newport – Worthy Seaman and Commander" was signed by its author, Dr David Male who has also written The Mayflower Expedition profiling Christopher Jones, captain of the Mayflower, who also lived in Harwich. Both books cana be obtained from the Harwich Society.
Posted by Sylvia Kent at 2:18 PM No comments: