A GOOD DAY OUT 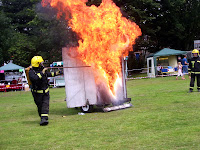 By courtesy of Newsquest (Essex) England
To many Billericay newcomers, Fun Day at Sun Corner was just that – a relaxing afternoon for the people of the town. Billericay’s Mayflower Rotarians, supported by Billericay Squadron ATC, Lions Club and others, produced their usual great programme. The marching band, vintage cars, dog displays, Fire & Rescue dowsing the dramatic flames around the chip-pan, downtrodden Judy getting her comeuppance from nasty old Punch – to the amusement of the tinies - all topped off with candy floss and dribbling ice-cream.
Older members of the community will remember the equivalent of today’s Fun Day that happened annually in Billericay for more than a century - although under different names.
Billericay Sports Day – loved by townspeople was a regular event from the 1880s. Held on Farmer Quilter's field off the Laindon Road, its organisers were Fred Eales, Billericay’s saddler and Sammy Heard, the undertaker. Races were hugely popular. Watches, tea-sets and cutlery, given as prizes, were displayed in Fred’s saddlery shop-window weeks before the big day.
During one Veteran’s Walking Race with 86-year-old Iziah Cracknell in the lead, onlookers overhead taunts by his critics with the shout: "Keep your heels down Ziah" – needless to say, he always won his special race. Years before, in the late Victorian period, fairs and circuses drew people to Sun Corner field, first parading along the High Street and settling for a week dispensing entertainment. A local newspaper dated 28 October 1881 reported:
Mr Frederick’s travelling theatre arrived here last week and performances have been given nightly since. It stands in a meadow near the Sun Inn.’
Billericay’s own famous Rosaire circus family would often start their spring tour through England by first performing on Sun Corner field during the 1930s.
Within living memory we have the fund-raising fetes and pageants, photos of which are in many Billericay albums.
Mrs Annette Fowler remembers the fun of past carnivals, which always seemed to be blessed with sunny weather. "They were lovely occasions," she recalls, "the whole town turned out to see Jasper (Jake) Layland heading the procession on his ‘penny farthing’. Floats fashioned out of lorries and carts were decorated so that you couldn't see that they maybe the old coal-lorry or bread cart; colourful crepe paper was used to decorate the bicycles and prams. The carnival queen and her court were always the centre focus of the carnival. Lovely teas were organised for the children in Archer Hall and we all have wonderful memories of the time. Lots of money was gladly given for whatever the theme of the carnival was that year." Happily, things haven’t changed that much.
Posted by Sylvia Kent at 10:11 PM No comments:

Labels: A GOOD DAY OUT 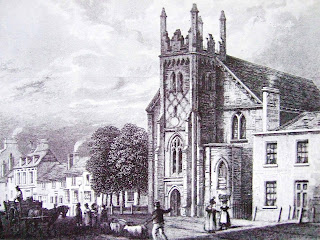 Posted by Sylvia Kent at 1:07 PM No comments: