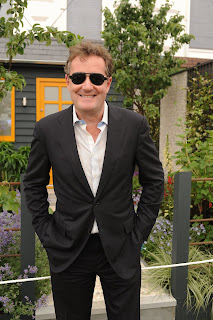 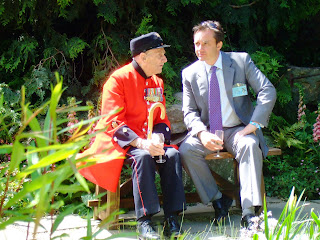 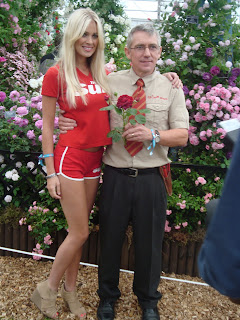 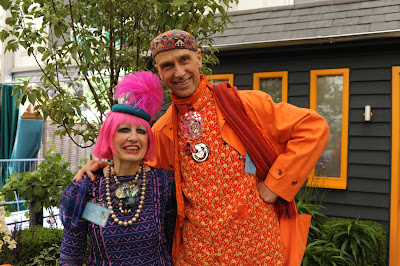 Chelsea showed off many of its gardens, large and small, but this Suffolk-based Nursery was particularly interesting. John Woods Nurseries’ Fruitful Garden won a Silver-Gilt Flora on Monday.

Designed by DeakinLock, A Fruitful Garden formed part of the RHS Chelsea Flower Show Four Generations feature, sponsored by The Sun. The feature shows visitors how to develop an existing front garden to grow fruit alongside existing planting with minimal fuss or outlay. Ease of maintenance and optimum use of limited space were key factors in the design.

The award follows a high profile start to the event for John Woods Nurseries, who also welcomed actresses Barbara Windsor and Hannah Gordon, broadcaster Piers Morgan and designers Zandra Rhodes and Linda Barker onto the stand.

Created for a theoretical end-of-terrace property on a new build development in an East Anglian town, A Fruitful Garden features reclaimed galvanised water tanks that act as features while collecting rain water for irrigation. The plot was bordered on two sides by a fence of reclaimed metal re-bar and timber posts which were semi industrial, reflecting the urban location. They also allow greater access to planting around the edges of the plot, making maintenance easier. A stone plinth provided seating in the garden while a high western boundary wall clad with pebbles and timber, reflecting the materials used throughout the property, and demonstrating how, even in a small space every surface can be used creatively.

Speaking from the Show, John Lord, managing director at John Woods Nurseries, said “A Fruitful Garden aims to demonstrate to new homeowners that front gardens can be ideal places to grow fruit in a colourful, private setting without great upheaval or expense. We’re delighted to have won this award and look forward to another busy week at RHS Chelsea Flower Show.” www.johnwoodsnurseries.co.uk.
Posted by Sylvia Kent at 10:48 PM

JLS AT CHELSEA FLOWER SHOW - OVER NOW TILL NEXT YEAR 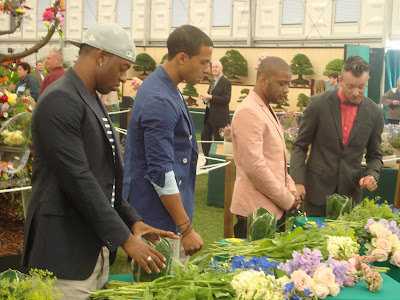 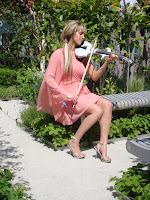 Since Monday's Press Day at Chelsea, have received masses of pictures and news from Chelsea, plus nightly visits via BBC TV. Here are a few more pics - among 200 taken at the launch - which was far less crowded on Monday. Tonight on The One Show you'll see JLS, members of the British Boy Band, arrange some flowers - now that's something different!
Posted by Sylvia Kent at 11:04 AM 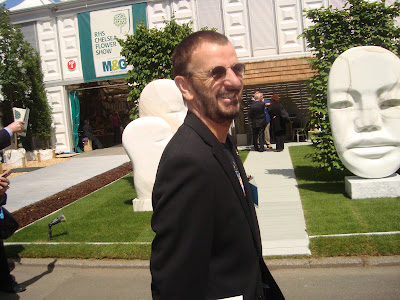 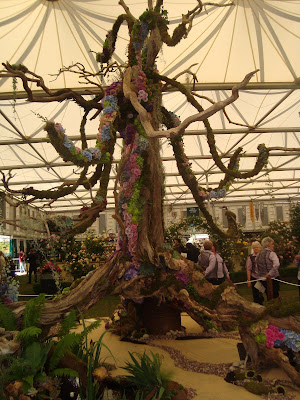 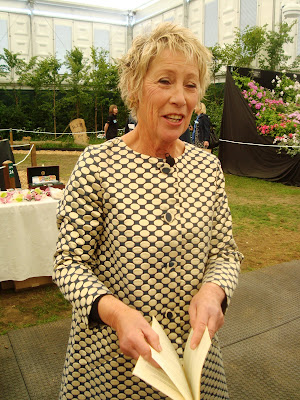 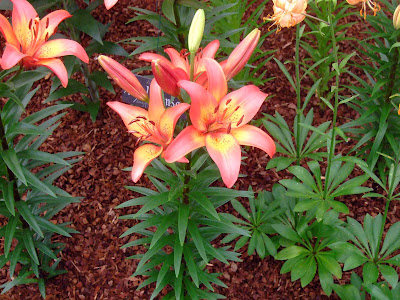 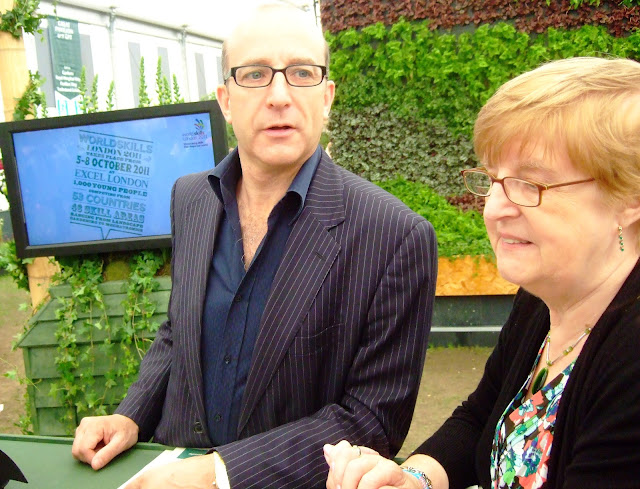 Pictured top are regulars at Chelsea, Ringo Starr and Carol Klein. Also orchids and cabbages, roses and rhubarb - exotic plants and allotment veggies - they all appeared in their wonderful profusion yesterday at the VIP Preview at Chelsea at dawn yesterday. This was my 12th year (although I did interview Percy Thrower at Chelsea in 1980) and its fun meeting up with journo pals in the Media Tent, followed by non-stop snapping of stars and horticulturalists from around the world. The Celebrity list gets longer each year and a couple of hundred well known characters such as Gwyneth Paltrow, HRH Prince Albert of Monaca, Paul McKenna (with his mum) Piers Morgan, Nigel Slater, Terry Wogan, Julian Fellowes, Helen Mirren, Christopher Biggins and Will Young enjoyed the colour, atmosphere and music among gorgeously arrayed stands. Super friendly folk offered Champagne, strawberries and lots of cake and a real party atmosphere was evident. Oh - and I came back with some lovely cuttings and advice from the best gardeners in the world. Made some new friends, too! A wonderful first day at Chelsea.http://www.rhs.org.uk/Shows-Events tells you wht is happening and www.suite101.com (sylviakent)gives a few more photos
Posted by Sylvia Kent at 9:39 AM 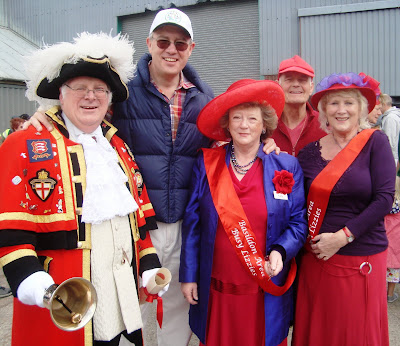 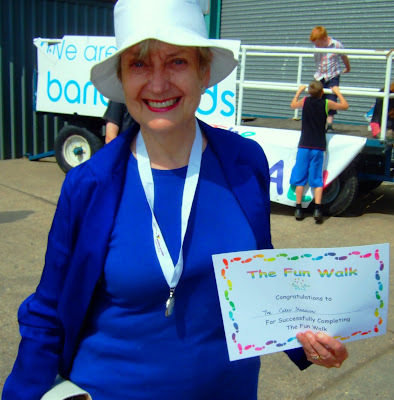 Our Member of Parliament, John Baron's very special Charity Walk took place at Barleylands Farm today. Only about five miles walking around this fabulous farm and great countryside and a chance to talk to loads of people raising money for their special charities. I was walking on behalf of the Billericay Cater Museum, which is certainly a great place to visit (open every day except Sunday 2-5pm) www.catermuseum.com. Today was so well organised, as usual, with great music, BBQ food, colour and atmosphere AND thousands of pounds were raised - a super, but tiring day.
Posted by Sylvia Kent at 7:39 PM

LYNFA PHILLIPS AND HER WORK FOR HER JAPANESE FRIENDS 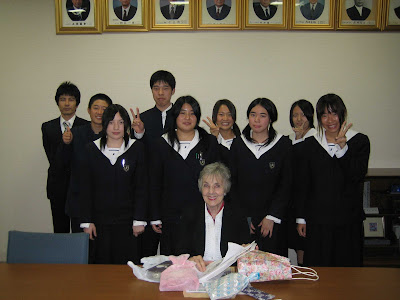 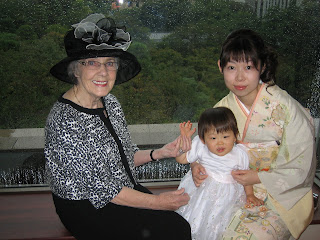 I’m on a Japanese theme this week and have, in the past, mentioned Lynfa Phillips, a friend who is a superb business woman from Pontyclun, South Wales. Lynfa has been awarded all kinds of prestigious awards, including Welsh Business Woman of the Year.

She is a board member of Groundwork Merthyr, Rhondda, Cynon, and Taff which is twinned with Groundwork Fukuoka Japan. Lynfa’s success in the private sector with her own Japanese firm and her special knowledge of her business and culture have given her a special insight into Japanese life.

The Executive Director, Mr Taeto-Otani requested help from their Welsh colleagues, to which Lynfa,as chair of the Groundwork Merthyr and Rhondda Cynon Taff Fund Raising Team mmediately responded, hoping to raise £10,000. Lynfa commented: “The date of the launch is Saturday, 21 May and Roy Noble, the well known BBC broadcaster, will perform the ceremony. The congregation of St Paul’s church in Pontyclun have been very supportive, a collection was made and I have a three figure sum to take to Groundwork next week. On behalf of, the committee of our community shop, the Chair person David Allen of our community shop brought a cheque to my home yesterday for £2,000.00 and a special “prize” is a hosted tea for two and a tour of The House of Lords. My heart is heavy with the devastation along the North East Pacific coast area of Japan following the earthquake, tsunami and damage to the nuclear plant at Fukushima. Groundwork trusts in the UK in harmony and total support for Groundwork Associations in Japan along with many other Non Governmental Agencies are helping the Japanese Government and peoples.

“With my friends in Japan whom I regard as my “Made in Japan” families, in the past, I visited the Sendai area. We visited Matsushima which along with Miyajima and Amanohashidate are considered three places of outstanding scenic beauty. Now, towns and villages washed away, no agriculture or fisheries, the major employment in that area and even more serious and long term, radio activity. My thoughts and prayers go out to the nation who are sharing each other’s grief and standing firm in their support.

“In 1996 when I inherited Import Agencies Ltd from Mr Taichi Nishio, I knew little about sake or beer and absolutely nothing about importing. As a somewhat mature, teetotal, Welsh widow, I had tremendous help from Japanese business people. I felt I was building bridges of friendship between east and west, respecting cross cultural issues in this great multi cultural world we live in. Those bridges have withstood the test of time. My message to people is, PLEASE HELP US TO HELP THEM" Your kind donations will change their lives and make the world a better place.”
Posted by Sylvia Kent at 4:11 PM 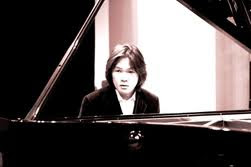 News and images of the Japanese earthquake and tsunami were dreadful and the country is still trying to recover. Several friends are actively raising money for the disaster and below you will see detail of composer and pianist Motoki Hirai's very special concert on Wednesday 25 May at 7.30pm at London's Cadogan Hall. Motoki's work is truly wonderful as you can hear on his sound clips. Here are details of his programme. Do come and support him and the team to raise money. Cadogan Hall Box Office 020 7730 4500 Prices £25 £22 £18 and £12 www.cadoganhall.com/showpage.php?pid=1418

Acclaimed worldwide for his imagination and sensitivity, Japanese pianist Motoki Hirai returns to London for his Cadogan Hall début following his recital début at Carnegie Hall and a recent European recital tour, as well as a concerto performance at Smetana Hall, Prague. His appealing programme will include some of his own works alongside masterpieces from the standard repertoire.

"A most brilliant and sensitive musical talent." (The Guardian)

All proceeds from this evening's concert will go to help people affected by the Japan earthquake and tsunami. For further details please visit www.motoki-hirai.com
Posted by Sylvia Kent at 9:12 AM 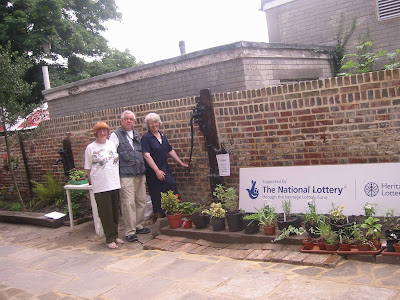 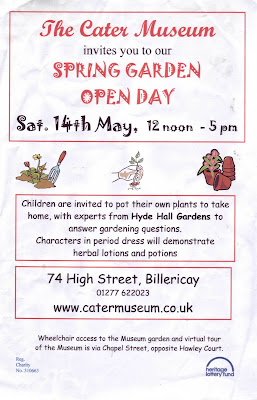 Saturday 14 May is going to be great for history lovers and gardeners alike. Do visit us at the Cater Museum at 74 High Street, Billericay from 12 noon onward till 5pm when you can meet horticultural experts from Chelmsford's Hyde Hall Gardens. Entrance is free to all and wheelchair access to our Museum is easy via the Chapel Street entrance (Opposite Hawley Court). Check out our website at www.catermuseum.co.uk or phone 01277 622023
Posted by Sylvia Kent at 2:41 PM 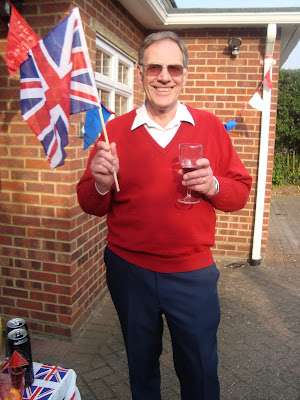 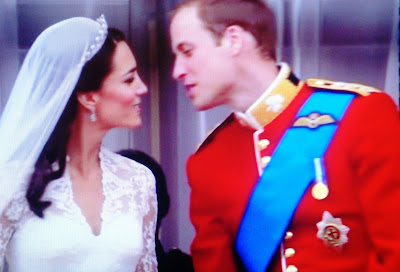 Fabulous wedding day, I'm sure all will agree. More than two billion people around the world were believed to have viewed the spectacle on television. Essex folk had fun at our various street parties and there was a great feeling of pride and lightheartedness over the whole day. Have some gorgeous photographs courtesy of some supersonic 'snapper' colleagues - in turn, they were given some of my features to back up their photographic work. Do pay a visit to my latest feature on www.suite101.com - then pop my name in the box.
Posted by Sylvia Kent at 9:28 AM