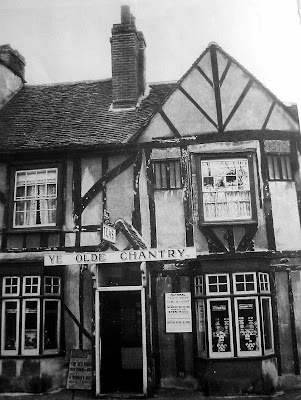 [Photo]
The story leading up to the US Thanksgiving tradition has interesting Billericay connections. It was from our town - on 6 September 1620 that six townsfolk joined the contingent of Puritan emigrants who boarded the Mayflower ship at Plymouth. Christopher Martin, who is believed to have lived at the Chantry House at 57-61 High Street, was the ship’s victualler who supplied the food for the voyage, including flour ground at the Bell Hill windmill.

Martin’s wife, wife Marie, step-son Solomon and servant John Langemore embarked with Peter Browne,Richard Britteridge, two other emigrants, who lived in neighbouring Little Burstead. Conditions during the 66-day voyage across the Atlantic were awful. The Mayflower was terribly overcrowded. The crossing was so stormy that it cracked a main beam of the ship but the ingenious use of a printing-press as a screw-jack to support the beam, enabled the ship to hold together. During the journey, one person died and two boys were born, Peregrine White and the aptly named Oceanus Hopkins,

When the Pilgrims reached Cape Cod they ‘fell upon their knees and blessed ye God of Heaven who had brought them over ye vast and furious ocean’. Sadly, the folk from Billericay died shortly after reaching America.

Attempts by the newcomers to provide food were pitiful. During the first month they caught only one cod. In January 1621 they caught three seals and shot an eagle. Mostly they lived on shellfish from the beaches and nuts from the woods. By spring, half had died from scurvy or starvation. Then into their lives came Samoset and Squanto, two Indians who showed the Englishmen how to live off the land. By the end of their first summer in America, the newcomers were able to celebrate their harvest with a thanksgiving feast.

They invited the local Indians to join them. Four men were sent to shoot wildfowl and returned with a modest bag. But their guest of honour the Indian chief Massasoit turned up with an escort of no less than 90 hungry braves. The Indians were able to bring in five deer after a brief hunting expedition; somehow there was enough food for all.

The Pilgrims continued to hold this ‘thanksgiving’ feast in succeeding years, gradually adding dishes traditionally associated with it. Other New Englanders adopted the custom and when they travelled westwards, took it with them. But it was not until 1863, during America’s Civil War that President Lincoln issued a White House proclamation calling on the “American people wherever they lived to unite with one heart and one voice”.

By courtesy of... Essex Life and Billericay Weekly News - Newsquest.
Posted by Sylvia Kent at 1:41 PM

5 JANUARY 2008
HAVE-A-GO MORNING OF MORRIS DANCE
Time: 10 am-12.30 pm at the Recreation Rooms, Billericay High St.
Aged between 9 and 90? Male with 2 legs? Need to work off that Xmas tummy? Ever fancied a go at Morris dancing? This is your chance with no strings attached. Mayflower Morris Men will be hosting a have-a-go morning of dance for complete beginners with two left feet - no pressure - totally free - just for fun - bring your friends. Refreshments. Tel. 01268 710709. www.mayflowermorris.com
Posted by Sylvia Kent at 1:32 PM 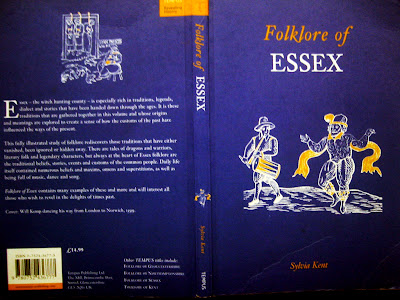 Essex is a fascinating county. During my travels, I collected many intriguing stories that I felt belonged under the folkloric umbrella. The Oxford English Dictionary defines folklore as the ‘traditional beliefs customs, songs and stories, preserved in oral tradition among people; the branch of knowledge that deals with these; popular fantasy or belief.’ Well, the material I gathered certainly fell within this remit. Along the way, I met Darren Mann from the Paranormal Society who passed on numerous ghost stories connected with Essex. Many people with knowledge of witches were obliging in supplying fascinating background material and the Witch Museum staff in Boscastle, Cornwall were also helpful. The Folklore Society staff kindly arranged for me to view some of their huge collection of books on folklore which is held at University College London.

I also appreciated help from the British Library, Colindale Library, English Folk Dance and Song Society and Essex Museums and Libraries. Readers will learn about our ancient Dunmow Flitch ceremony, Fairlop Fair that so intrigued Charles Dickens; the Whispering Court at Rochford and dozens of other traditions peculiar only to Essex. Dr Ralph Vaughan Williams and Cecil Sharp - two important luminaries responsible for the growth of folk song and dance in 1903 - have several pages dedicated to their work in England. The book’s cover personifies William Shakespeare’s contemporary, Will Kemp, whose agile, distinctive figure appears on the book’s front cover, ‘ dancing the Morris’ on his way from London to Norwich through Essex during his ‘Nine Days Wonder’ during Lent 1599.

I'm still signing books and meeting people who seem to enjoy reading about their county’s traditions, legends, dialect and stories that have been handed down through generations. Extracts from the book have been included within BBC Radio Essex, Phoenix FM Radio and BBC Radio 2 productions.Publisher: Tempus Publications ISBN 0-7524-36777
Posted by Sylvia Kent at 9:03 AM 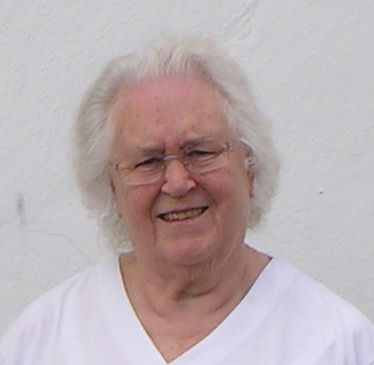 NEW BWC CHAIRMAN - ENA LOVE
Brentwood Writer's Circle was born in May 1941. Our founder, Elizabeth Baxter had problems in travelling to her favourite writers's group in the City, well, it was being bombed at the time as there was a war on! Undaunted, she started one herself, in the front parlour of her home in Brentwood. Now, 67 years later the Circle has full membership of sixty who meet monthly at the Ursuline Convent (Fairview Room), where members are encouraged in every aspect of prose writing. A workshop is held on alternate months providing opportunities for mutual criticism and exchange of ideas between writers. It provides members with advice and guidance on markets and other matters pertaining to their writing, while speakers (authors, publishers, agents etc) fill our diary in other months to make an interesting yearly programme.
Posted by Sylvia Kent at 7:39 PM 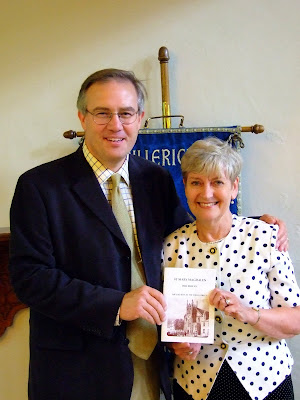 TRANSFORMATION AT BILLERICAY On Wednesday, Lord Hanningfield and John Baron MP visited St Mary Magdalen Church in Billericay High Street to see the progress of the four-year project to transform the church into such a precious asset for the whole community. Essex County Council contributed £15,OOO from its Community Initiative Fund and other generous groups provided financial help towards the £200,000 required.
Also present was Chief of Development, Alan Campbell and the Reverend Elwin Cockett. A booklet is available describing the provenance of the church. This also outlines the history of this lovely little town. The slim book is on sale at the Story Teller, Presence Shop and, of course, from the church.Labels: ST MARY MAGDALEN CHURCH
Posted by Sylvia Kent at 6:52 PM 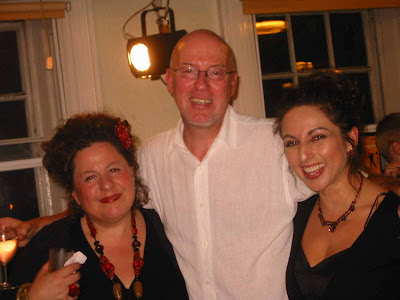 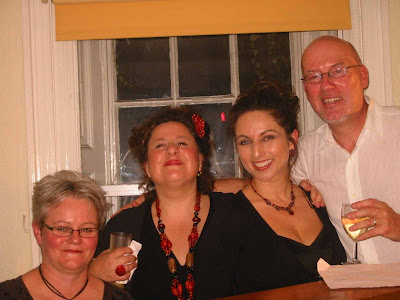 Brilliant book launch on 11 October of Malcolm Burgess’ new book FORTY-FIED – funny and certain to be a best seller. Malcolm, busy journalist, scriptwriter and author of other books including the best-selling I HATE THE OFFICE, was on top form and welcomed many friends, family and, of course, his readers. His book ISBN 978-1840468-23-6 is published by Icon Books.
The cabaret was great. Fabulous Sue Kelvin who recently appeared in Chicago and Fiddler on the Roof, Sarah Travis, whose orchestration in Sweeney Todd brought her a Tony Award and lovely Jo Lee, Chelmsford based star, who has appeared in so many top shows in London were all superb. Here they are with the star of the evening, Malcolm.
Posted by Sylvia Kent at 9:12 PM 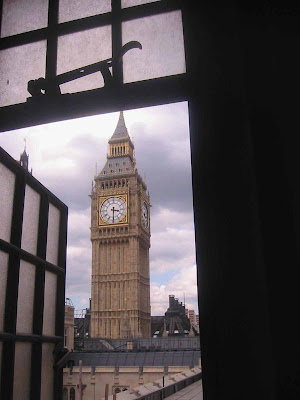 Many thanks to Caroline Dubanchet of the superb LONDON ESSENCE on-line magazine for allowing my article to be reproduced here. To read this and previously commissioned essays, plus bang-up-to-the-minute London news in eight languages, log on to Caroline's website at LONDON ESSENCE.

Westminster is arguably London's most famous - and historical area - the seat of England's government for almost a thousand years. The name is also used for the larger City of Westminster which covers a wider geographical area and since the mid-60s has included the former boroughs of St Marylebone and Paddington.

The historic core of Westminster is the former Thorney Island on which Westminster Abbey was built. The Abbey became the traditional and historical venue of the coronation of the kings and queens of England. The nearby Palace of Westminster, in later centuries, housed the developing Parliament and law courts.

Politics were confined to men for centuries until the introduction into Parliament of the American-born politician Nancy Astor (1879-1964). She married her second husband, Waldorf Astor (later Lord Astor of Hever), the MP for Plymouth, Devon on 3 May 1906. She developed a passion for politics and took over his Plymouth Sutton seat when he moved into the Lords on inheriting his father's viscountcy. On lst December 1919, she was introduced into the Houses of Parliament Chamber, accompanied on either side, by Arthur Balfour and David Lloyd George. She wore a black coat and skirt with white blouse and black tricorn hat. Punch described her as "demurely, but daintily, garbed".

The Astor family were immensely rich, owning Cliveden mansion in Berkshire, a home in Plymouth, but primarily she lived at her lovely home at 4 St James's Square, Westminster. She remained a Conservative Member of Parliament for the next 25 years.

In the annals of history, Lady Nancy Astor was one of Westminster's most famous and colourful personalities.

CHRISTMAS PAST IN ESSEX 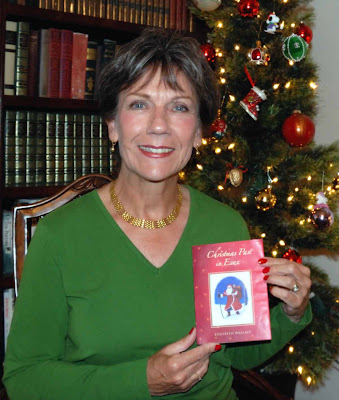 CHRISTMAS PAST IN ESSEX

At last, Elizabeth Wallace's superb book is about to be launched in England. Christmas Past in Essex is fascinating. Elizabeth describes the life and times of the people in the county at this special time of the year. She outlines the life of the rich and the poor and how they celebrated. Many of the folk migrated to Essex from the London area and, of course, they brought with them their distinctive customs and traditions that are still used at Christmas-time.

Christmas Past in Essex offers the reader an extraordinary historical glimpse into lives of the people of Essex. From the little girl who fondly recalls her Christmases in an orphanage to jack Bartlett, the Billericay postman who diligently delivered the post and then returned home to fall asleep over his Christmas dinner. There are scores of wonderful stories and excellent photographs, many of which have never before been published.

As Elizabeth collected the wonderful memories and treasured photographs, she was mindful of the responsibility placed in her hands. To this end, she recorded the memoirs verbatim, and was therefore able to keep the individual’s voice and essence. There are more than 60 fascinating photographs, original artwork from Essex artists and over one hundred intriguing stories, customs and traditions contained in Christmas Past in Essex.

Elizabeth hopes that readers will enjoy the stories and photographs contained in Christmas Past in Essex and in doing so will rekindle pleasant memories of their own Christmases that will be handed down to future generations.