Shenfield Pond in the Snow 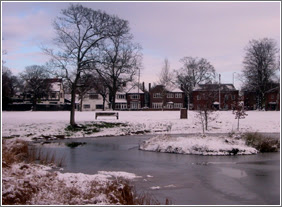 It’s strange how wintry weather changes our familiar countryside. Shenfield Common, which encompasses the familiar wood-fringed millpond, takes on a decidedly ethereal aspect in the snow. What a contrast to the Common’s summer backcloth against which many bridal couples pose after trooping across the road from the Register Office opposite. Children, photographers and artists love the current snow-scene. In years gone by, locals would bring out their skates and twirl happily on the frozen millpond.
The Common has served many purposes to locals over the centuries. Once people lived there in make-shift tents and grazed their ponies and donkeys. Cock-fighting, badger-baiting and bare-knuckled fighting attracted many and here swine-dealers killed their animals. Gorse and firewood were gathered and gravel shovelled. Throughout the centuries, the Common provided a communal place for festivities, political meetings, sport-days, and, in later years, church worship and open-air concerts.
Check out the 1777 Chapman and Andre Map. You will see a small triangular pond is visible; it wasn’t until the snowy winter of 1885 that one of the new Conservators of the Common (a group established February 1884) suggested that the tiny pond alongside the millpond be joined to afford more room for skating in wintertime. In his book "Brentwood Fireside Tales 1906-26" John Larkin described how it came about:
"On summer evenings and early mornings came young men, old men and big boys. Some with picks, some with shovels, some with wheelbarrows. Working men, city clerks, bank clerks, shop assistants, and tradesmen – in fact all sorts and conditions of men set to work. Some picked, shovelled, wheeled away, whilst others went to the Artichoke for beer. So by shovelling, picking, wheeling, beer-drinking and working in black coats, cricket costumes, football jersey, velveteen coats and in shirt sleeves the job was finished and the mill pond as we see it now (1926) is evidence of what one can do by volunteer labour if men are of the mind."
Some folk may remember another pond, not deep enough for skating but many children loved sliding on it. Known as ‘How’s Folly’, this was on the far side of the Common, running alongside Ingrave Road. It was dug out in 1856 by Mr How, a master at Brentwood School who lived at The Firs nearby.e had H How’s Folly pond lasted a century but was eventually filled in and willows planted on the spot. A third Shenfield pond still exists – only accessed through undergrowth near the Seven Arches Road, neglected now, but serving as a wonderful sanctuary for winter wildlife.
By permission of Chelmsford Weekly News
Posted by Sylvia Kent at 5:16 PM No comments: