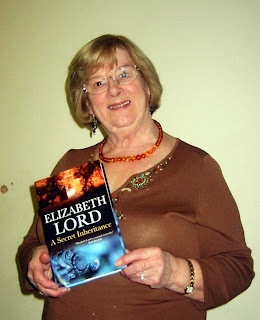 Here's wishing viewers a very Happy New Year. Author Elizabeth Lord has just seen her 20th book published and will be one of the writers who will be at Brentwood Library on Friday 11th January 7.30pm to talk about her work. With her will be Frances Clamp. Jim Reeve, Steve Crancher and many more Essex writers including yours truly.
Posted by Sylvia Kent at 10:34 AM 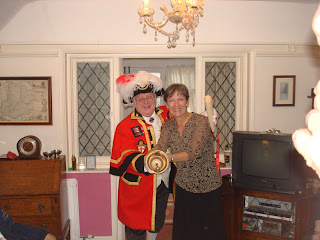 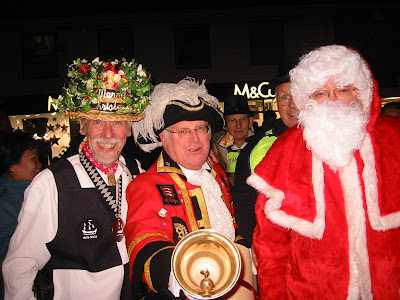 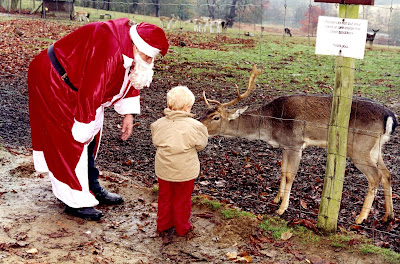 By kind permission of Essex Newsquest

We’re not sure what this little deer thinks of Dennis Rookard (or Father Christmas on this cold December day), but his little companion seems happy and will undoubtedly remember this magic moment in South Weald Park.

Playing the role of the merry old gentleman was just another part for Dennis who has scripted, acted and produced programmes for radio and local TV and written freelance journalism since the 1960s. Dennis’ memories have recently appeared in CHRISTMAS PAST IN ESSEX. Being interviewed for the book made him reflect on his own Christmas experiences.

‘Like many other kids of the 1950s, I never realised I was deprived in any way. My family lived in a two-up-two-down cottage with gas for lighting and cooking, candles and oil lamps in the bedrooms and an outside loo at the end of the garden – didn’t everyone?

‘At Christmas, I was always so excited about the thought that Santa would be coming that I tried to stay awake to witness his arrival, but I never did and always fell asleep. Then I used to wake up before my parents on Christmas morning and race to the window to see if snow had fallen – it never did! Bu then my attention quickly went to the sack, or pillowcase that was at the bottom of my bed, as I could see there were things inside and I knew Santa had been. My sack was always full of toys, sweets and books. I remember getting an Eagle Annual which was one of my favourite books. But one year, I got a portable radio – a special treat!

‘Since we had no electricity, there was obviously no television but during the Christmas holiday we used to listen to a large battery-powered wireless. The radio was only used in the evening as we listened to Dick Barton or Journey into Space with everyone hoping the battery would last through these great programmes. When not listening to the radio, I was reading, as I’ve always had a voracious appetite for books.”

When Dennis grew up, he took a job as Santa in a large store. He said:

‘ I remember a little girl coming into my grotto with her mother, and after a little humorous repartee I asked the child, “What would your mum like for Christmas.” She looked me straight in the eyes and with a very serious look, she replied, “A man!’’

These days, Dennis is constantly busy at Christmas, either working with Brentwood District Talking Newspaper, Eastward Hospital Television, and this December, on one of his regular radio programmes for Phoenix FM.
Posted by Sylvia Kent at 8:50 PM 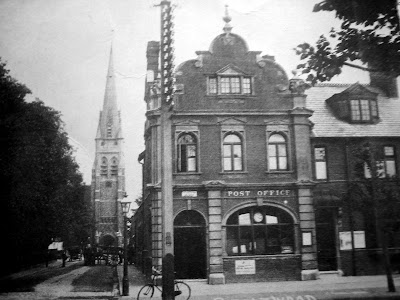 What will become of our favourite old post offices? Much speculation at present! Although many smaller post offices have already disappeared, many fear the closure of their Brentwood post office which has stood in its present location at the corner of St Thomas Road and High Street for almost seventy years. Even before this, the earlier building - an ornate Dutch gabled post office built in 1891- was one of the most popular meeting places in Brentwood.

Christmas time, of course, was extraordinarily busy for staff, particularly the postmen who started at dawn and were used to delivering mail at least three times daily – even on Christmas Day itself. They also received the mail from Billericay which was driven in by special van for onward transmission by GPO workers, one of whom, was our lovely Jack Bartlett – now aged 93.

Much has been written about Brentwood’s first known postmaster. He was Samuel Smith, who in 1637 earned £5 a year, a sum that remained unchanged until 1760. At the end of the 18th century, letters from Brentwood were despatched at 5am and the mail received from London the same day via the mail-coaches and, in earlier centuries, by post boys on horseback.

Around that time, the medieval Crown Inn existing for centuries in Brentwood High Street was used as a postala centre. This was managed by the formidable Emma Birt. A few years later, the Chequers Inn was used for receiving post and we know that a shop at 109 High Street, still extant, which stood opposite the ancient Town Hall was a hive of business, collecting and sorting mail.

In 1872 the Post Office declared that parcels not exceeding 12-ounces in weight could be sent by letter-post. That year, 200,000 letters containing small gifts were sent through the post in Essex alone at Christmas time. By then the famous Henry Cole had introduced the first official Christmas card which started an avalanche of cards for those who could afford to buy and send them.

One Brentwood resident, writer and photographer, Geoff Perrier has wonderful memories of starting at the General Post Office as a 14-year-old messenger. This was during World War Two. His duties included cycling to Warley Barracks daily, delivering dozens of coded telegrams arriving in the town. He remembers some of the quaint uniforms during worn by GPO postmen. “They wore double-peaked hats looking like bosuns from Nelson’s days and delivered the letters and parcels to shop-keepers in huge two-wheeled wicker baskets. These were bright-red with the GPO initials painted in black letters on the side. Geoff has written his wonderful memories entitled Reflections.
Posted by Sylvia Kent at 2:19 PM

Meet my friend, Lynfa Phillips, living in South Wales who is a very special lady with tremendous energy and intelligence and is one of my role models. In 2005 she was awarded Welsh Woman of the Year and is one of the first Dynamo Role Models attending a short training course in November 2001 following which she began her input to schools in 2002, which is ongoing. On 12th December Lynfa has been invited by the Head Teacher of Tonyrefail School to present special prizes to some of the pupils, in recognition of examinations they sat in the summer of 2007. She will be so proud to attend.

She explained: “These are people who run their own businesses and as such, we are commissioned to go in to schools and present to year 9 and 10 pupils, mainly on entrepreneurialship. We try to change the culture from a ‘can't do’, to a ‘can do’ attitude. Of course many of the pupils know the path they wish to take, but for others, it is opening up the paths of feasibility and possibility. I tell them if I could do it at 62 with NO Experience, think of what they can do, the world is their oyster. I love it!” At this age, Lynfa took over a company trading with Tokyo AND learned the language, too. What a girl!

Lynfa is inspirational to people of all ages. Earlier this year, she was asked to be the Team Facilitator for Team Japan, which is in the Millennium Centre Cardiff as part of the 2007 Global Enterprise Challenge. 13 countries participated. America won. She visited the school in Kyoto in November.

She is a board member of Groundwork Merthyr, Rhondda, Cynon, Taff. They are twinned with Japan and this was the reason she was asked to join the board, representing the private sector and sharing her knowledge of Japan and their culture. Lynfa has achieved so much certainly over the last decade and it looks as if this coming year will be even busier. Will try to keep up with Lynfa and her fascinating life.
Posted by Sylvia Kent at 2:04 PM

Saturday's concert was absolutely wonderful and raised a good sum for the Air Training Corps cadets, also for Essex Police Memorial Fund. Thanks to everyone for coming along and warm thanks to all those great singers from Chelmsford.
Posted by Sylvia Kent at 9:30 PM