MUSIC IN THE PARK 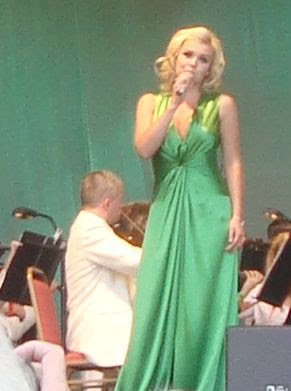 Just back from seeing and hearing Katherine Jenkins at Lake Meadows in Billericay, our local park, gorgeous voice - thousands there - good evening.
Posted by Sylvia Kent at 9:45 PM

WITH THANKS TO NEWSQUEST ESSEX

Sorry to inflict yet another moon feature on you, but can’t neglect the blogsite. This feature appeared today in the Brentwood Weekly News and have had such nice responses from readers.

Who remembers watching those almost unbelievable pictures of Neil Armstrong, commander of Apollo 11 taking that “one small step for a man, one giant leap for mankind” at 03.56am on Sunday, 21 July 1969? Millions of TV viewers around the world watched as he was joined by fellow astronaut Edwin ‘Buzz’ Aldrin and the two began collecting samples of moon dust and rock. How hugely important it was capturing that moment photographically. During the next three years, six missions to the moon were made and a total of twelve astronauts walked on the moon. During these missions thousands of images were taken, most of them with the Hasselblad 500 EL. Many of these images are famous, like the one from Apollo 11 showing Buzz Aldrin with Neil Armstrong reflected in the glass of his helmet.

Why I have concentrated on the photographic aspect of this tremendous event is that one of our own Brentwood photographers, Peter Elgar, had strong connections at the time. That year was extra special for Peter. He was studying for his Royal Photographic Society qualification and ABIPP. He then worked for the Geology Department at London University College and was excited when he was commissioned to take pictures of rock and dust samples from the moon landing expedition. Here we see an illustration of the minuscule dust particle – looking a little like a stuffed olive, and Peter’s contribution was duly recognised and appreciated. His ‘moon dust’ pictures appeared in many newspapers and journals.

Peter’s photographic work is well known. He is Past President of Brentwood & District Photographic Club. When asked about the aspect of the craft he enjoys most he reckoned: “Processing. It’s the most exciting part of the operation. In the early 1950s, I learnt how to develop and print my own work and concocted my own developing mix. At the time I bought photographic paper from my chemistry master at one penny a sheet. My first camera was an Ensign Selfix costing £24 10s (£24.50) saved from my pocket-money."

Peter’s experience is wide, covering most aspects of photography, including weddings, portraiture, fashion, industrial and all forms of commercial work. This point was reached in 1969 which was the point at which he took those historically important moondust photographs.
Posted by Sylvia Kent at 11:26 AM

Many of our SWWJ members who write books on travel and tourism are enjoying increased sales. Our member in Denver, Colorado, Elizabeth Wallace produced EXTRAORDINARY PLACES - CLOSE TO LONDON a few years ago and it is certainly a favourite with American tourists, continuing to sell very well in the States. Elizabeth enjoyed coming over to England to research the magic of the South East and will be visiting soon for signing sessions in Waterstones and Borders.
Posted by Sylvia Kent at 4:11 PM

Our Society of Women Writers & Journalists is proud of its 500 members who earn their living by their pen (or keyboard). Among our numerous professional travel writers, we welcome Barbara Bothwell who has just returned from Florida where she has lived and worked for eight years.

As a former travel guide (Spain and Italy) it was inevitable that she would turn to travel writing. This was encouraged when she retired from the travel industry to become a legal secretary in the City of London. “The only thing that kept me sane was travelling overseas as often as possible,” Barbara admits, adding, “then writing about it.”

Now she writes articles about cities, their architecture and history, and one of her favourites, cruises. She has cruised and written about the Nile, Alaska, the Panama Canal, the Caribbean and Transatlantic cruises. Did she visit other places in the U.S.? As Americans say, “You betcha!” Cities up and down the East Coast from Bar Harbor to Key West; the West Coast from Seattle to San Diego (her two favourite West Coast cities). In between there were places such as Chicago and Mobile, Alabama.

Among other countries Barbara has visited are Hong Kong, Singapore, Bali, Cyprus, Crete, Italy, Portugal, Madeira, Belgium, the Netherlands, Budapest, Prague, Slovenia and Scotland. She has lived in Mallorca for seven years, in Venice (Italy) for five months and San Francisco for three months.

Barbara’s work appears in publications such as in-flights (Emirates, Gulf Air, Cyprus Air, Eva Air, to mention a few), cruise, business and consumer magazines (e.g. People’s Friend, Mature Living (US), Fort Myers Magazine (US) among others.
Posted by Sylvia Kent at 11:32 AM

We have so many interesting writers on our team at the Society of Women Writers & Journalists. A welcome recruit to Council last year was Josephine Chia who likes to be called Phine. Although living in Sussex, Phine is currently in Singapore, busily signing copies of her newly released book. Phine is a Peranankan or Straights Chinese and is originally from Singapore. She is a published author, tutor and speaker.

As a well known expert on yoga - teaching from an holistic way - Phine combines breathing and physical movements with emphasis on the Energy Body. Although she began with Sivananda tradition, her yoga incorporates many other traditions like Bihar School of Yoga, Kundalini Yoga etc. Therefore the yoga she teaches tends to have a therapeutic element and has the capacity to heal – physically, emotionally, mentally and spiritually. To attend her course, you can be at any age and at any level of physical fitness. She takes on one-to-one clients for Yoga Therapy. Recently, Phine has started to teach Sanskrit Mantra chanting for peace of mind and healing.She teaches Creative Writing, Singaporean Cookery and Yoga.

Phine writes both fiction and non-fiction. Her non-fiction books and articles deal with yoga, spirituality and other subjects like memoirs. Her fiction works include short stories and novels, details of which can be found on her website. She has won several prizes and was a finalist of the Ian St. James awards for short fiction in 1992. Her recent successes include a Certificate of Commendation for an article in 2006 and 3rd Prize for a short story in 2007, both from SWWJ. She also has articles published in spiritual magazines in 2008.
Tutor's Web Link : http://www.josephinechia.com
Tutor's Email Link : jchia@btinternet.com
Posted by Sylvia Kent at 5:46 PM