BY KIND PERMISSION OF NEWSQUEST 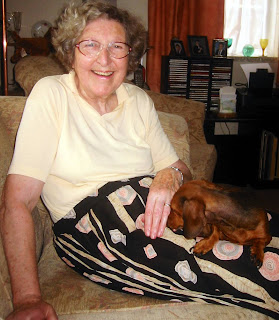 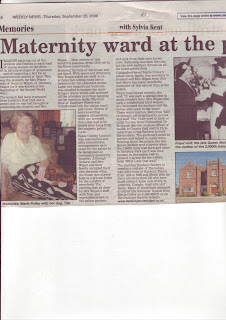 BORN IN A PALACE!
Hot off the press, this article appeared today in the Chelmsford Weekly News and already we have had some contact from "babies" who were born in Danbury Palace during World War II. There are some great reunions planned in the coming months, so do ring Marie Polley if interested in attending. Contact: 01245 356276
Posted by Sylvia Kent at 9:36 AM 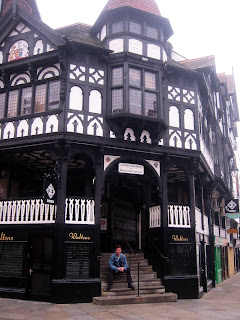 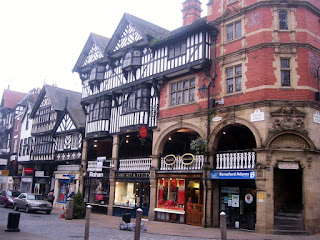 Some readers wanted to know more about the Chester Weekend, organised by SWWJ. Thought I would pop a few pictures on - really is a lovely place - do pay a visit.
Posted by Sylvia Kent at 11:12 PM 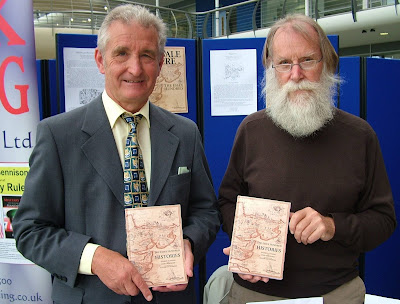 ESSEX GIRLS
I always stick up for the admirable girls of our county. My friends, the authors Andrew Summers and John Debenham do likewise. View their "THE ESSEX HUNDRED HISTORIES" and see what I mean! ISBN 095522951-0

Imagination, foresight, money, power, determination, fragility, feeling and achievement are what most of us aspire to at one time or other. However we are sometimes the unfortunate victim of circumstances beyond our control. Essex Girls are a cut above average and history shows they are remembered. Below are a few who have made their mark.

We begin in AD60, when the original Colchester queen, Boudicca, (Boadicea) led a ferocious revolt against the Romans and is remembered as the first Briton who took the fight to the invaders.

600 years later a gentle young lady Osyth (or Ositha) the intended wife of Sighere, the Christian King of the East Saxons was beheaded by a marauding band of Vikings simply because she resisted their demands. Legends came into being and miracles are said to have happened in and around the Priory of St Osyth near Clacton.

Local guide books mention that in the 1300s two sisters of Saxon descent, Beornia and Synnove, were responsible for the two churches standing side by side in the village of Willingale.

Through out this period the Abbess of Barking held one of the most powerful positions in the Kingdom. Amongst the Abbesses were a number of Queens, Princesses and nobles. Katherine de Pole was one who gave sanctuary, cared for and educated the Tudor children during the Wars of the Roses.

Anne Boleyn, the second wife of Henry VIII and mother of Elizabeth I, had strong connections with Rochford. She met her fate when she was betrayed by others.

In 1588 Queen Elizabeth I, although not an Essex Girl, by birth chose Tilbury to make her most famous speech ‘I have the body of a weak and feeble woman’

Margaret Lucas, born in Colchester in 1623, was destined to become the most famous authoress of her day. She excelled in writing poetry and philosophy in spite of being exiled during the turbulent times of the English Civil War.

Have you ever noticed who is on the back of a five pound note? The lady is Elizabeth Fry the great prison reformer based in Plaistow in 1810. She has been featured on this denomination since 1992.

One hundred years later another Essex lady came to prominence in Braintree. Elizabeth Courtauld the wife of the industrial magnate Sam, was the first to run a crèche on an organised basis.

During the First World War at Chalkwell, Ellen Elizabeth Josceyln inherited a beach business from her husband when he suddenly died in 1917. Nearly everybody said she would not be able to cope. She did and the beach business thrived and ran for over 30 years. Today the seaside beach by Chalkwell rail station is still affectionately referred to by locals as Joscelyn’s Beach.
Posted by Sylvia Kent at 9:57 PM

PETER PLAYFORD IN THE DESERT 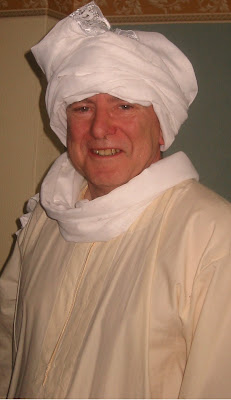 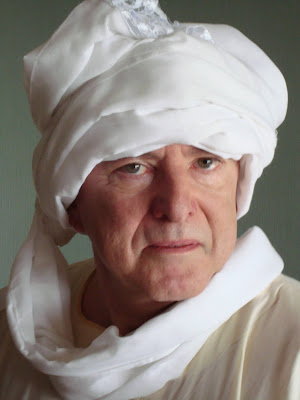 Billericay Town Guide gives details of some of our nationally-known charities that are close to people’s hearts. Rarely do we see local publicity to raise funds to help renal patients. Life saving dialysis costs huge amounts so it’s vital to make people aware of BASHARP (Basildon Hospital Association of Renal Patients), a charity formed in 1999 at the instigation of Dr Stephen Morgan. At the time, he was Head of the Renal Unit at Basildon Hospital. Today, he is Medical Director for Basildon Hospital and President of BASHARP.

Local resident Doreen Potter is our well-known President of Billericay WI, but she also raises funds for BASHARP. On Wednesday mornings you’ll find her at the Renal Out-Patients Dept at Basildon Hospital. Here she sells new (unwanted) gifts on her stall. Her late husband George was the first chairman of the charity. It was Doreen who alerted me to another special person, Peter Playford, a bank retiree, who crossed the Sahara Desert in his extraordinary attempt in raising funds for BASHARP.

"I travelled to Khartoum in January," said Peter of Middle Cloister. "There were eight of us crossing the Sahara. The journey took 15 days and we covered more than 250 miles. With temperatures in the 40s, I found that the camel's gait, the unusual food and the heat badly affected me. We weren’t able to stop as the journey was planned to get from one water hole to another, but the tribesmen helped and we managed to finish the trip safely. Night-time was 30-40 degrees colder and we were perpetually worried by wild animals and snakes. I made sure my tent had no peep holes for intruders!" Peter raised £1,424 through this venture and BASHARP are grateful for this marvellous addition to their funds.

Mike Langstone, current BASHARP Chairman, said: "My involvement came about when my wife Muriel became a dialysis-patient seven years ago. We have raised over £50,000 during this time and all funds are for the patients and the renal unit. This year we have purchased a 'Site Rite' machine for £10,000, a vital piece of equipment making life easier for nursing staff and renal patients."

Closer to home we learn about Billericay renal transplant patient Norbert McGarr who takes part in the London Barts Transplant Team at the annual British Transplant Games. Norbert is a gold medallist and a well-known contender. All ages take part from toddlers to octogenarians. Their aim is to promote health & fitness after transplant and raise awareness of organ donation. Norbert with his wife, Lesley and friends travelled to Sheffield recently for the Games. Last year saw the 30th gathering in Edinburgh. Details and short film-clips can be seen on website www.transplant.org.uk. 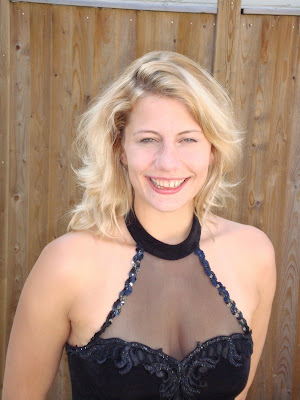 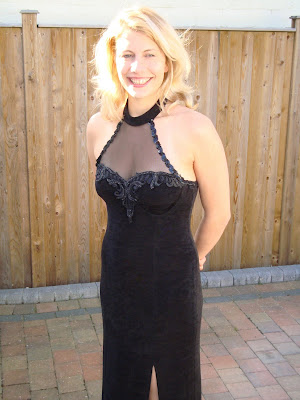 Fashion is a funny old topic - making us look ridiculous or wonderful, depending on our age, size, colouring and dare I say, bank balance. However, our lovely Louise - a medical undergraduate now at St Andrews - always looks great in whatever she puts on - just look at what this astute student picked up for a song yesterday! Certainly competes with the Red Carpet Brigade.
Posted by Sylvia Kent at 9:16 AM 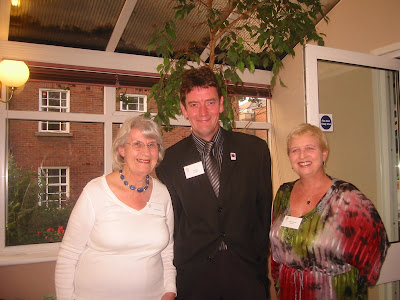 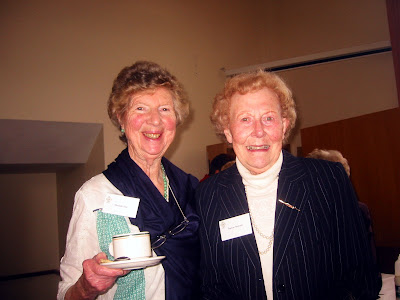 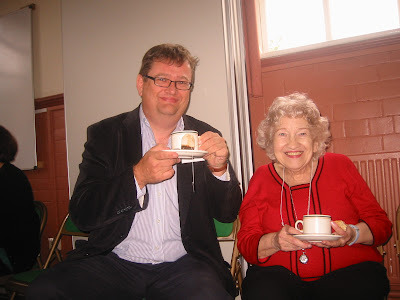 What a great weekend at Chester University for the Society of Women Writers & Journalists for our biennial Writing Conference. This year we wanted to enjoy the company of our members who live in the north-west. Of course, it’s great to write to them, text, talk on the phone and email, but there’s nothing like meeting colleagues face to face to learn about their work and lives in general. Great food, entertainment, warm and friendly atmosphere – also an opportunity to meet some famous authors, journalists, poets and top people in the media world. Simon Brett, Candy Denman, Freya North, Debby Holt, Alison Chisholm, Chriss McCallum, Nick Corder, Zoe King and Sally Ann Voak among our own members from all over the country.

Chester itself is beautiful and we have Chris High – a top journalist and writer – for providing an (almost)dawn tour around this lovely ancient Roman town.

Frances Clamp and I were particularly thrilled to be there, as Frances had won the Joyce Grenfell Scholarship for children’s writing and yours truly the Sir Harry Brittain Scholarship for journalism – so this is one weekend we shall never forget. Oh – and I took more than 100 photographs of people and places connected with Chester! Will download a few snaps later.
Posted by Sylvia Kent at 9:26 PM 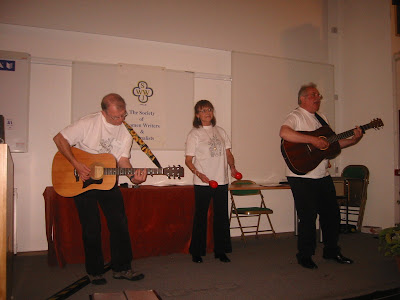 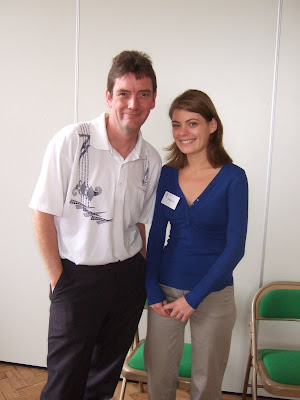 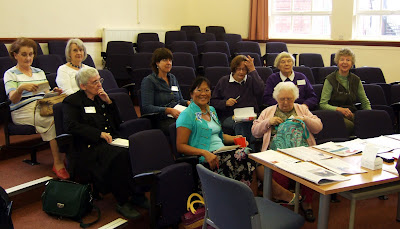 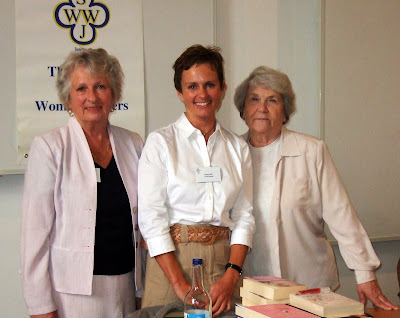 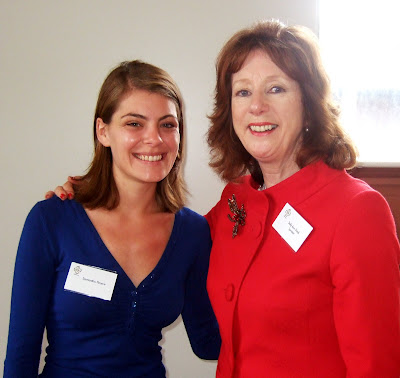 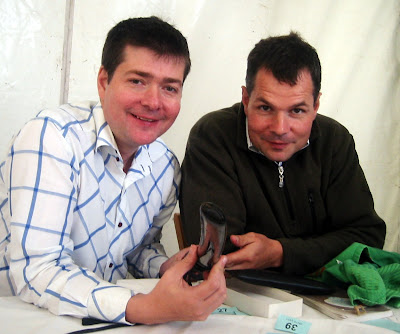 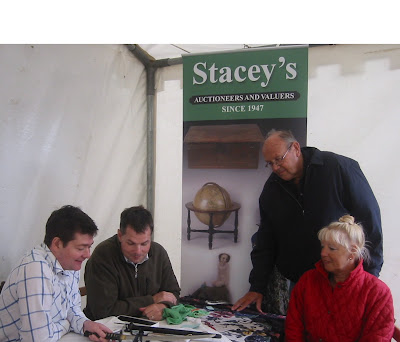 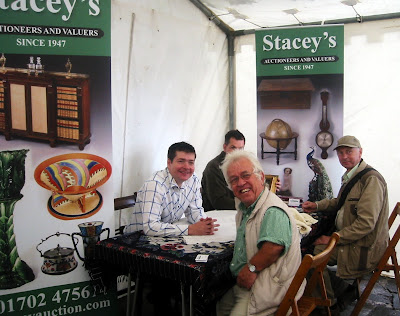 Many thanks from Chris Brewster, the Curator at the Cater Museum, Billericay to all the visitors who turned up today to meet our super antique valuer TV’s Mark Stacey and his talented brother Paul. More than one hundred valuations took place and the experts worked non-stop examining and giving advice on our visitors’ precious artefacts. BBC Essex and Phoenix FM gave us terrific publicity as did local newspapers. We must thank our "Friends of the Museum” who worked so hard behind the scenes, supporting us as always. Mike Edmonds, Billericay-educated TV and film actor - who also knows a thing or two about antiques - enjoyed meeting the Stacey Brothers who happen to live in his home town near Southend. We enjoyed a fascinating day!
Posted by Sylvia Kent at 8:03 PM 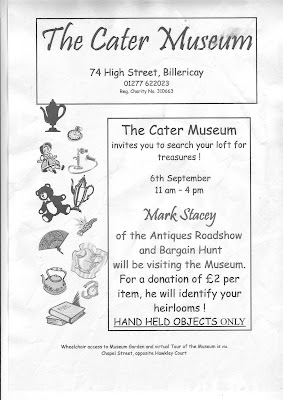 Billericay's Cater Museum looks forward to welcoming Mark Stacey, our expert from the Antiques Roadshow and similar TV programmes. Our special Antique Day at the Museum starts at 11.00am until 4pm on Saturday 6th September. Do come and support us. The garden is now open, too so come and meet us all.
Posted by Sylvia Kent at 1:22 PM