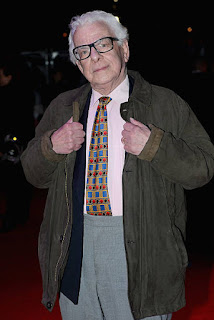 So very sad to hear the new of the passing of  Barry Cryer two days ago, at the age of 86. Barry was a super comedian and writer linked so much to British comedy, radio and film, has died at the age of 86.

The news prompted tributes posted on social media. Stephen Fry wrote: “Such sad news, one of the absolute greats of British comedy, Barry Cryer, is no more. A glorious, gorgeous, hilarious and gifted writer and performer who straddled all the comic traditions. Universally beloved … farewell, Baz.”  Barry worked with other stars of British entertainment including Morecambe and Wise, Tommy Cooper,  Spike Milligan, Les Dawson and the two  Ronnies among others.

In the early days, Barry was spotted by David Frost, who invited him to write for The Frost Report, which first aired in 1 the mid-60s.

I much appreciated his advice when writing a feature for Essex Life Magazine some years back when we made contact regarding his charity work in Goodmayes Hospital.  A charming, funny man. Warm thoughts to his loving family.

Posted by Sylvia Kent at 4:03 PM No comments:

Robert Burns, also known familiarly as Rabbie Burns, the National Bard, Bard of Ayrshire, the Ploughman Poet and various other names and epithets, was a Scottish poet and lyricist. He is widely regarded as the national poet of Scotland and is celebrated worldwide.
Born: 25 January 1759, Alloway  Died: 21 July 1796, Dumfries
Tonight is, of course, Burns' Night, so Billericay's local microbrewery team have organised a week of Scottish celebrations. Unfortunately the Burns Night Supper tonight and the Whisky Tasting on Thursday are now truly sold out but the Scottish theme continues through the week. The team have a couple of kegs from Scottish breweries Loch Lomond and Tempest for customers to try and their brewer Rick has made a cranachan version of Woody's Bark. For those of you unfamiliar with this traditional Scottish dessert, it's based on oats, cream, raspberries and whisky - can't wait to try some! Sounds wonderful and I will have a try at creating this fascinating sounding dish in my kitchen.

Cranachan is a traditional Scottish dessert. It was originally a celebration of harvest, made following the raspberry harvest in June. The dessert of cream and fresh seasonal raspberries is bolstered by Scottish oats and whisky. It has been called 'the uncontested king of Scottish dessert'. 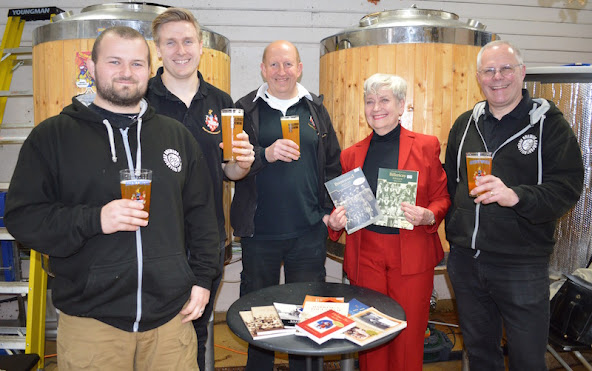 Credit: Wendy Pike l to r:  Dave Golding, Ethan Kannor, Head Brewer at Brentwood, Roland Kannor, MD at Brentwood, me and Trevor Jeffery, Director Billericay.
On Saturday evening in the micropub Trevor and his team  are inviting you to wear Scottish fancy dress with a prize for the best costume - so get out your tartan and have a great time.
A 3-min walk from Billericay Library
Hours:
Closes soon ⋅ 9PM ⋅ Opens 3PM Wed
Phone: 01277 500121
Posted by Sylvia Kent at 7:51 PM No comments:

I've often written about my interest in films and television programmes from the past, so was delighted to discover Talking Pictures TV (found it on Freeview Channel 81) which made its appearance in May 2015. Recently, the Hertfordshire Life Magazine published my six-page article which so many people have enjoyed reading.

Today, 23 January at 5pm, you will enjoy watching the The Footage Detectives. Mike Read and Noel Cronin show us some pre-WWII footage of Germany, a lost episode of a series teaching English starring Hattie Jacques and footage of Radio Essex. Next Sunday, 30th January at 5pm, the chaps are on their virtual travels once again, reliving the family holidays of the 1950s. Don’t miss this slice of nostalgia.

More filming is taking place as we speak and the team at Talking Pictures have been filming more episodes of The Footage Detectives this week. Lots of amazing guests have been lined up, including Frank Muir’s son, Jamie Muir with unseen Peter Sellers footage, Patsy Blower, Larry the Lamb and Gay Emma from Badger’s Bend.

Also in the Talking Pictures studio this week has been the wonderful Caroline Munro. She’s been filming more introductions for all you Cellar Dwellers. The Cellar Club (Friday at 9pm) really does go from strength to strength. The team have found more unusual, films for you. This week’s triple-bill includes The Abominable Dr Phibes (1971). This comedy horror is a camp classic and stars the magnificent Vincent Price, who is clearly enjoying every minute of his performance. And there’s a very familiar face as the photos of the doctor’s late wife. (Clue: she introduces the film).

If you were at the Festival of Film in Stockport last year, you will have seen Frazer Hines in conversation with Melvyn Hayes. Happily, we recorded the event, and you can watch Melvyn regaling us all with his funniest stories on Tuesday at 3.25pm in Talking Pictures with Melvyn Hayes.

This week’s episode of Maigret (Saturday at 8pm) has as its guest star, Margaretta Scott. Margaretta was in lots of British films of the 1930s and 40s and moved easily into television. Her career was given a boost in the 1970s when she played Mrs Pumphrey, owner of Tricky Woo the dog, in All Creatures Great and Small. She went on to star in Together, which you can see every Monday and Wednesday at 9am.

You can watch Talking Pictures TV on Virgin 445, Freesat 306, Freeview or Youview 81 or on the Sky digital satellite platform, channel 328.

Posted by Sylvia Kent at 1:39 PM No comments: 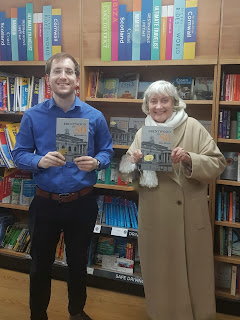 I truly can't resist a book shop, particularly when my own books are resting on the shelves waiting to be signed and purchased.  Well, the publishers also like their authors to visit the stores where they are sold.  Book shop managers and staff are always welcoming and delightful and often spend just a little time talking about the latest titles. I was delighted to meet the super James recently at W H Smith in Brentwood when I popped in. My latest book is Brentwood in 50 Buildings and I am lucky in having my book tour planned for later this year. I rather missed out due to covid raising its ugly head!
Posted by Sylvia Kent at 8:23 PM No comments: 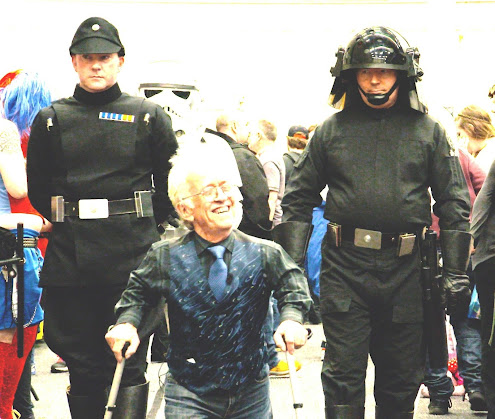 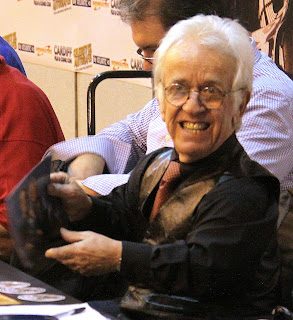 Here's one birthday boy today with more than the usual share of cards - Mike Edmonds, well-known actor who has appeared in many films and on the London stage. Always a good friend whom I first interviewed twenty years ago.  Today is his special birthday and we will  drink his health and send him our love and greetings from so many of his fans here in Essex and from around the world. Check him out in the 1977 film Star Wars' credits.
Mike Edmonds  is an English actor who played Logray in Star Wars: Episode VI Return of the Jedi. He was also one of Jabba the Hutt's puppeteers in the same film. He controlled Jabba's tail. 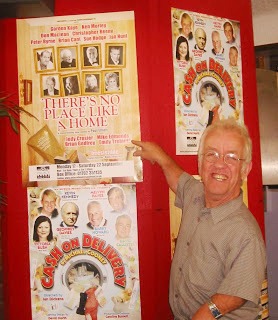 I must confess to having a soft spot for The Lady magazine, well, their then editor Arline Usden liked my articles enough to publish quite a few of them in the early 1990s. It is always rewarding for a writer to see their byline, which seems to give that little extra confidence and encouragement to look around, research and begin new projects which lead to publication in their and other journals.  The staff members of this weekly magazine were like no other. Many of them had spent years working in their quaint building at 39/40 Bedford Street, in London 's Covent Garden, and I always felt so welcome when I turned up for a cup of tea. As the magazine had so much earlier history, particularly with my rather special Society of Women Writers and Journalists (founded in 1894), I was delighted to be invited to  look through their archives stored in the basement to take pics of their first edition in 1885. 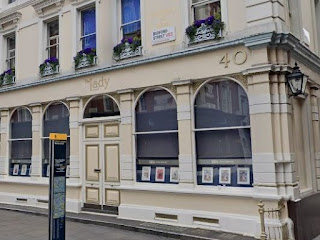 During my investigations at the start of one of my books The Woman Writer I knew I had to include at least one chapter devoted to The Lady, as I discovered that many of the pioneers of our own Society had also had work accepted by their very first editor Nora Heald.  She was followed by Rita Shell in 1895.  It was Rita, one of our eventual SWWJ  Vice-Presidents who set up social projects for women, including championing many worthwhile causes such as encouraging women to stand for election to their local Board of Guardians and improving conditions for female hospital nursing staff. Her weekly salary was £7 and this mother of four boys continued as editor until 1925. An amazing woman.
So much has happened in the annals of The Lady magazine which is still owned and run by the Bowles family. By 1959 it was in the hands of Tom Bowles, grandson of the founder Thomas Gibson Bowles, where it remained until 2008, when Tom handed it over to his nephew Ben Budworth. Ben believed passionately that The Lady could still be relevant for today's woman, and he started the huge changes that have now occurred at Covent Garden. In 2009 Rachel Johnson was hired as the magazine's ninth editor and they celebrated The Lady's 125th anniversary in Feb 2010. Things were about to change, and boy - did they go apace.
The Lady journal left its famous address in 2019 and is now based in Borehamwood, Hertfordshire. Check website:  www.lady.co.uk
Posted by Sylvia Kent at 7:29 PM No comments: 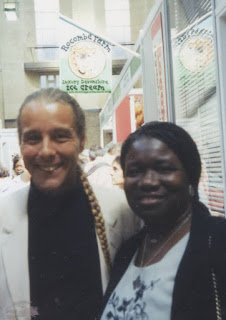 Super programme today on BBC Radio 4 - really good  this afternoon listening to all the experts on GQT. I've been a long time listener and have enjoyed meeting most of the team locally or at the annual Royal Horticultural Society gatherings at London's Chelsea Flower Show and at other wonderful garden venues.  The team members are discussing compost today (my favourite subject at the moment) and I can remember chatting about this important horticultural topic many years back with the compost guru Bob Flowerdew.  Here is Bob snapped with my then editor of Sa'adia, the first national magazine for Botswana - Comfort Smith.
Posted by Sylvia Kent at 3:46 PM No comments:

Sylvia Kent
F/L author/columnist. Latest traditionally published book BRENTWOOD IN 50 BUILDINGS is on Amazon & bookshops. Work is published in national, regional & on-line. Following Freelance Writer of the Year award (Writing Magazine) my work has appeared in 75 titles and my FOLKLORE OF ESSEX contributed to Channel 5’s film COUNTY SECRETS. THE WOMAN WRITER was published by the History Press. This book outlines the history of the SWWJ’s 1894 foundation and includes our pioneering members in journalism, literature & poetry. Joyce Grenfell, former SWWJ President enjoys a special chapter. My books were reviewed in The Times and other dailies. As SWWJ’s archivist. I'm immersed in new historical research, contributing to on-line press, see my downloadable Kindle books. Also Facebook,Twitter & Amazon @sylviaakent & film/audio clips added. BARKING & DAGENHAM FROM OLD PHOTOGRAPHS and BRENTWOOD IN 50 BUILDINGS. I won SWWJ scholarship and became a Fellow of the SWWJ and won the John Walter Silver Salver two years running. I now have the honour of being president of Brentwood Writers Circle, broadcasting on PhoenixFM, BBC Essex & other radio stations. Page views 424,000.